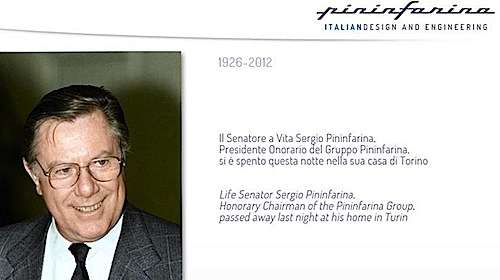 Pininfarina Passes Away At 85

Pininfarina, one of the greatest coach masters of the history of the automobile passed away today in Italy at the age of 85. Our condolences go to the Pininfarina family.
Advertisement

It would be hard to sum up in a few paragraphs the incredible legacy the Pininfarina brand has left on the automobile industry. Sergio’s, son of famed Gian Battista 'Pinin' Farina, born in 1926, joined the family company after graduating in mechanical engineering from Turin's Polytechnic University. He became chief executive in 1961 and then chairman when his father passed away in 1966.

From Ferrari To Peugeot. To say that Sergio Pininfarina defined a genre, seared his name on exotic cars and forever revolutionized the way we view cars is an understatement. Pininfarina has been the envy of many. Collaborating with carmakers form all over the world, Italians coach masters excel at the exact opposite of the Teutonic spectrum that dictates forms follows function. The heck with it with practicality! Passion dictates form, wild flowing lines and an emotional appeal that stops you in your tracks.

From the 1984 Ferrari Testarossa, to the 1996 Peugeot 406 Coupe, the 1986 Fiat 124 Spider, or the 2002 Ferrari Enzo, the 2003 Maserati Quattroporte and the 2004 Ferrari Scaglietti, Sergio has led a long and productive life. While we might most remember his collaborative work with Ferrari, Alfa Romeo and Maserati that started with his father, we might not remember as well his influence on Chevrolet, Cadillac, Bentley, and Volvo top name a few. The stunning 1947 Cisalfa coupe, designed by Gian Battista can be seen in New York's Museum of Modern Art.

Modernization, Keeping It Unique. But Sergio did the impossible. He modernized a one-off, unique, hand-build coach making process into a modern process. Going from 524 units per year to more than 50,000 in fifty years was one of his greatest business achievement.

While the firm had its fair share of problems in the 80s and then in this past decade, it managed to survive by rethinking itself. Much as local competitors Zagato and Bertone had opened its manufacturing doors to ease certain products off of assembly lines for car manufacturers, Pininfarina was able to maintain its relevancy throughout the decades.

It’s hard to imagine how he went from the lines of the stunning and revolutionary Ferrari 365 GTB/4, otherwise known as the Daytona and then following it with the pure power 512 TR and F512 M, enthusiastically called Testarossa, Red Head. While the late Testarossa, not to be confused with the earlier 1950s models weren’t as evoking as the 365 GTB/4, what followed would forever be etched in the mind of teenagers and young adults, the inimitable Ferrari 308. Magnum P.I. might have made it famous but its lines spoke for a generation, blending daring flowing yet stretched lines with a look of pure speed, even at stand still.

Ferrari wasn’t the only maker Pininfarina had a love affair with and Alfa Romeo dates back even more. My 1974 Alfa Romeo Spider is a perfect example of this age of Dolce Vita when the little original Spider sporting a vivacious 1.3-liter would scream all the way up to 7,000 rpm. The Alfa Romeo Spider’s long life would last from the 50s until the mid-1990s with only 3 to 4 aesthetic modifications. Those were the days when you didn’t mess with brand recognition, unlike today’s obligatory yearly facelifts.

Pininfarina also graced us with the cosmic Alfa Romeo Disco Volante, a study in aerodynamics that came about before wind tunnels were used for car for car designing. The latest Alfa Romeo Pininifarina is equally stunning and eagerly anticipated, the 4C that will give the Porsche Boxster a run for its money.

It’s hard to pen how far and how much the Pininifarina house has influenced the world of automobile design and Sergio’s passing today is a great loss.

Tesla Contemplates A New Strategy for China Retail even As Sales Boom
Jay Leno on Elon Musk & EVs: “I Think He Should Get ... Credit"
END_OF_DOCUMENT_TOKEN_TO_BE_REPLACED