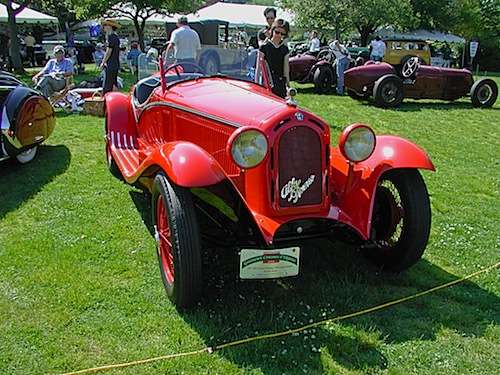 The automotive charitable event held each year on the Pebble Beach Golf Links in Pebble Beach, California, has continuously attracted higher and higher caliber cars since its inception in 1950. This year is no exception.
Advertisement

Old Classics Still Appreciated. Who ever remembers the epic duel that pitted Ford and Ferrari to grueling races across the globe. It finally saw Ford win, after spending millions and millions to beat local Ferrari artisan in 1966, racing against the stunning Ferrari GTOs and have etched the GT40 upon the minds of many. The recent auction house, RM sold a 1968 Ford GT40 for $10m in downtown Monterey. This lightweight race car in its Gulf/Mirage livery was the one used as a camera car in the film "Le Mans,” Its sale sets the record of the week tailing another GT40 at Bonhams' Quail Lodge sale, in Carmel Valley where this 1966 model with race history sold for $2.2m. Via Sports Car Market.

The Pebble Beach Tour d’Elegance 2012. If everyone knows about the Concours d’Elegance where up to $200 million worth of the highest grade of historic cars can gather on the famous lawn, the Pebble Beach Tour d’Elegance 2012 also shows some of these exquisite cars running and somewhat racing. The 15th annual scenic 60-mile trip around the Monterey Peninsula allowed vehicles that participated in the 2012 Pebble Beach Concours on Sunday, August 19th to spin their wheels. This year alone, over 150 historic automobiles took off from Pebble Beach for a tour of the region’s scenic driving routes with spectacular views.

More Than A Show. But it would be a mistake to call Pebble Beach just a car show. It’s much more than that. Pebble Beach attracts car collectors from all over the world, eager to show their unique and prized possessions. If the event has been known to gather many glorified garage queens, cars that rarely if ever leave the warmth and comfort of their storage, it has also changed a lot these last few years.

The Pebble Beach Concours d’Elegance is also a barometer. If up until a decade ago, cars were sometimes over restored and better than new, the trend has finally shifted to leaving them in their original state, giving us some extraordinary examples. In 2006, I was lucky to witness a 1930 Alfa Romeo 6C 1750 Gran Turismo in its complete original paint condition. It was fantastic to see how the paint had aged and it actually looked like.

Pebble Beach attracts la crème de la crème, but also serves as a sales statistics where the latest auction help re-evaluate a vehicle’s worth. If a few years ago we witnessed the strange muscle car bubble burst where a Road Runner fetched north of $4 million dollars, this trend has been re-evaluated to its current level, reflecting a more realistic value for such cars. This year, the GT40, which sold for $10m, certainly flies against the face of the global recession and proves again that a car with real historical provenance will yield the highest sales.