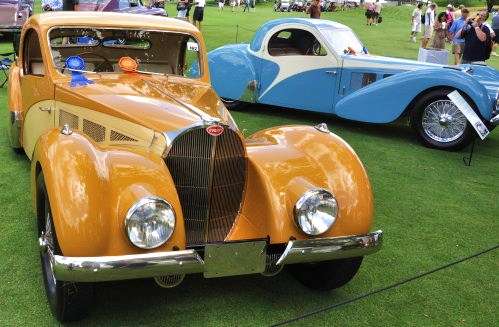 Gooding & Company has consistently brought us quality auctions and ever increasing numbers over the years topping with $36 million in sales this year, where it didn’t fail to meet expectations again.
Advertisement

Gooding & Company is celebrated internationally for its world-class exception automotive auctions. You might recognize the company as the one associated with some of the most prestigious automotive records in the world, such as the world record breaking 1957 Ferrari 250 Testa Rossa Prototype that reached a stratospheric $16.39 million, as well as the American Car at Auction where the 1931 Whittell Coupe Duesenberg Model J sold for $10.34 million. It also was responsible for the intriguing but unfortunately undisclosed private sale of the world’s Most Valuable Car, the mythical 1936 Bugatti Type 57SC Atlantic. The company announced this year it sold more than 70 out of total 77 lots at the Amelia Island Auction on March 9. These numbers are very impressive since it beats its own last record by more than doubling the 2010 results, once again establishing a new record. It wasn’t until 2002 when Gooding & Company achieved extraordinary results with $39.8 million in sales and 98% sold at its annual Scottsdale Auctions that its reputation has been firmly cemented.

Porsche, The Lion’s Share. One look at the results and you will see an incredible array of Porsche dominated the scene. There were some extraordinary race history Porsche that went on the auction block, including a few once held by the Drendel Family Collection that achieved $17.7 million. In that alone, no less than 11 world records were broken. The event reached a highlight when a surprise stage appearance from famed racer Derek Bell joined the auction as his sport prototype ex-1984 Porsche 962 sold for $1,925,000. Derek raced it in the Daytona 1985 and finished second.

Top Spot! As to who got the top spot this weekend at the Amelia Island auction, it went to the 1973 Porsche 917/30 Can-Am Spyder, which sold for an astonishing $4.4 million, breaking yet another record. The 917/30 is finally the most valuable Porsche in the world, at least in terms of auction sale.

As far as the results, “We are extremely pleased with our $36 million auction results, as it underscores the continued strength at the top of the collector car market,” says David Gooding, President and founder. “I’m proud of our team, delighted for our clients and I believe we managed to raise the bar this weekend on many levels.” In response to the successful results, Charlie Ross, Gooding & Company’s acclaimed auctioneer said, “Yet again, our Amelia Island Auction proved that, if you have the best, the sky is the limit!”

Again this auction proves a few things. First, if the collector market had followed somewhat with a delayed reaction the real estate market, this new era shows an opposite trend. Real cars sell for real money! Gone are the days when over-hyped muscle cars could turn million dollar profits, unless they are truly, really unique and rare. Second that Ferrari and older Alfa Romeos aren’t the only auction queens. While the Talbo-Lago, Bugatti and other older Bentley are still reigning in high on the auction block, Porsche continues its ever ending climb to fame and desirability. In the end, we can rest assure Gooding and Company will continue to deliver stellar auction results bringing in the finest of what makes our automobile world so unique, premium collector c