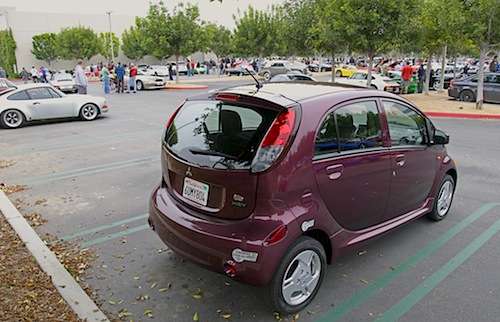 Cars And Coffee with A Mitsubishi i MiEV Electric Car

For those of you who know or are lucky enough to live near a Cars and Coffee event, you know this is the place where every Saturday you can see almost any car ever made on this planet.
Advertisement

I’ve been going to the Irvine, California Cars and Coffee Saturday morning, much too early event for a few years. Cars and Coffee is that event where anything can happen. This is the place where a Ferrari Enzo could be parked next to an original Fiat 500. This is where muscle cars are next to tricked out Lamborghinis. This where the new collector meets the seasoned ones, where older folks take the younger generation just to hear them say: “Wow, I didn’t old cars were so cool!”

Where Are The EVs? One thing you don’t see too much of are electric cars at Cars and Coffee. If the Saturday morning ritual brings in a crowd of experts and rare cars, electric cars are still not the norm. The occasional Tesla will make a sneak peak and park next to a Spyker. This is also why I had a certain amount of trepidation driving the Mitsubishi i MiEV to this gear head meet. How would people react to an electric car in the midst of the gasoline world? Much to my surprise, the reception was good and intrigued for the most part.

Three EVs At Cars And Coffee. Much to my surprise to other electric hybrids shared the alternative energy propulsion scene. Two Fisker Karmas were there. One was driven by its enthusiastic owner and the other was driven by Russell Datz from Fisker Automotive. Interestingly enough, and as it should be expected, the cars drew a bunch of electric drivetrain aficionados who maneuver the world of automobiles equally at ease between beautiful old cars and the modern promise of the electric motor.

Phil Tripper was here who owns and maintains the Nissan Leaf owner’s blog. Jeremy Whales, a friend I met a few weekends ago recharging the i MiEV at Mitsubishi’s blazing fast CHadeMo fast charger was also there. The rest were curious people, interested in what these electric cars are all about.

What I walked away from it was that you’ll always have the die-hard gasoline enthusiasts who will never like EVs. These people are no different than those who cling on to PCs swearing off Apple computers as irrelevant. With those people, there is no conversion possible. The ones who get it, get EVs. The conversation there is mostly about how great they are and how much more sense they’ll make tomorrow. The interesting conversations are with those who are curious, not yet convinced but open-minded. Those people usually give us intelligent talks about what electric cars are, their role in our society and what they bring us today and tomorrow.

Aaron Turpen wrote on May 22, 2012 - 11:46pm Permalink
"What I walked away from it was that you’ll always have the die-hard gasoline enthusiasts who will never like EVs. These people are no different than those who cling on to PCs swearing off Apple computers as irrelevant." Works both ways. :) Oh and Linux rules! Screw the Apple money grubbers and the PC crash test dummies. haha
Nicolas Zart wrote on May 23, 2012 - 7:35pm Permalink
LOL, Haiku rules even harder than Linux!