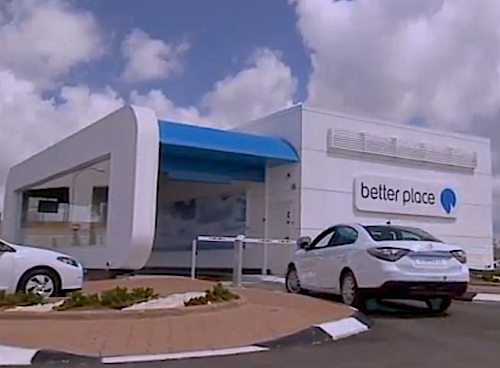 Battery Swapping To Seduce You To Buy Electric Cars

Better Place wants to build battery swapping stations for your electric car to relieve you of the so-called “range anxiety” touted by reluctant automakers. Will it be enough to entice you over to the electric car, EV world?
Advertisement

Back in 2008, Better Place, led by the charismatic Shai Agassi made quite a splash in an automotive world still reeling in from an unexpected recession (please don’t laugh..) with the notion that battery swapping stations could be built in order to let electric cars swap their depleted battery packs and go on their way. Theoretically, you could drive cross-country this way.

How Does It Work? According to Better Place, battery stations could be strategically placed in order to let you drive anywhere you wish. If this sounds familiar, its because Better Place took a lesson from the petroleum industry who promised Ford to conveniently place gas stations if he dropped production of those silly electric cars. In this case, a car could drive into a station, drop its battery pack and exchange it for a freshly charged one. Sounds great but there are some catches.

The Numbers. This is where practicality meets the road, each battery swapping station is estimated at around $500,000. Israel, who has funded a big chunk of Better Place vision is getting ready to roll out 100 such battery stations. In this model, electric car owners won’t own their battery pack, but lease them, paying for their energy use. The outlay when buying a new electric car, according to Better Place would be $10,000 less. What this probably means for a Better Place customer in the U.S. would be a $300 to 500 lease a month to drive freely where stations are placed.

Of course by now, acute readers will have drawn a list of road blocks around this model. First the amount of energy to keep enough battery packs cooled and charged per station adds to the overall cost. Another question still unanswered is how will Better Place guaranty the quality of the battery pack you just loaded, i.e. what criteria will determine when a battery pack is not longer suitable for a car. Lastly, knowing how well automakers don’t play nice with each other, is it conceivable they would all embrace a shared battery standard in order to use these stations, considering the many shapes, sizes and differing structures of cars in general?

While Better Place certainly has an attractive business model, it seems to make more sense for fleet owners who typically own a substantial number of a given car. Maybe this could be a way for them to open leasing to the general public. Better Place does offer charge points in its business model in order to increase flexibility and ease of use. In the meantime, the company will next head out to Australia, Japan, then Denmark. It has also secured another $200 million in funding should help the electric car reality come a little closer to you.
We'll have to see how I can edit articles at some point.

Anonymous wrote on January 27, 2012 - 1:27am Permalink
So far just Renault has signed on to this program. Unless other car companies will follow suit, it's difficult to see this model go forward in its current form. This may force Better Place to build their own cars. There are some partnerships with Chinese car companies already, but if they are forced to go down this road, it may end up being a far more radical solution and one with even more risks. I see a cheaper dumber car, with a smart network. Maybe that's why the car companies are not balking.
Nicolas Zart wrote on January 27, 2012 - 1:32pm Permalink
I agree with you. Better Place has come a long way from the original idea of only swapping batteries to now charging stations also. It's a very long shot and having car manufacturers agree on a standard is close to impossible. The car rental business is looking at a lucrative horizon if they get their ponies in a row, they could stand to benefit the most from EVs. Good point about Better PLace building their own car. CODA has managed well, so far and it wouldn't be too much of a stretch for them to follow suit. Plus, China is eager to invest with the reserve they have acquired.