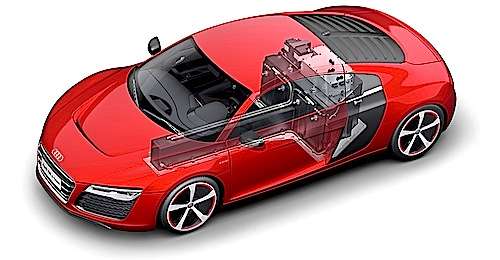 Audi has danced the one foot forward, two back with all-electric R8 e-tron. After holding back the project in October, it seems it is back on track, for now.
Advertisement

If you’re a little confused with Audi’s now you see it, now you don’t, now you hear about it, now you don’t, the electric version of the R8 e-tron is back again... at least for now. Audi has spun a wall of unanswered questioned and confusion around its electric R8. While the idea certainly intrigued many, that of using the performance oriented gasoline version R8 and turning it into an electric vehicle, its history has been plagued with: “We’ll do it!”... then nothing. It comes back once in a while and again disappears. It seems the electric R8 is back again, for now.

The Electric R8 History. In order to try to understand where Audi is going with it all, it would be good to remember that the R8 was introduced less than 9 months after then CEO Johan de Nysschen flat out denied any future in battery technology and held the electric drive to be inferior in many ways. That was in 2008 when electric vehicle promised everything under the sun. It was a strange turn of event but the wedgy e-tron caught our attention. And then... nothing. To be fair, we saw various prototypes tested, including a hybrid and other propulsion systems. It just didn’t seem Audi was serious about it and more and more felt like a PR stunt.

The Electric R8 e-tron Is Back. After putting the project on hold back in October 2012 due to a complete overview of the program, the R8 e-tron is now back, at least more or less officially according to Fourtitude, an Audi enthusiast forum. In all fairness, we can understand Audi’s insistence on continuing the work they had done with their Diesel technology. Turning a car manufacturing company on dime in the hopes the electricdrive would one day deliver when it didn’t master this technology would have been too much for the pragmatic carmaker. Audi might have tried to test the waters and today’s market is a little more subtle, at the very least, more matured.

The New e-tron. The changes are mostly in the design area with a tweaked style and a dropped aerodynamic coefficient down from 0.35 to 0.27. If the prototype was an all-wheel drive, the would be production would be rear-wheel driven.

Technically Speaking. The powertrain hasn’t changed much since our last update, see our: Audi Readies R8 e-tron After Nurburgring Electric Car Track Record. It should still sport the 2 synchronous rear-mounted electric motors putting out 376hp with 604 lb-ft of torque. The 0 to 60 is about 4.2 seconds and torque vectoring is used by controlling the electric motors’ output controlling torque and horsepower delivery. An added incentive to this last feature is that now the car turns more accurately. It’s no light weight at 3,924 lbs but its carbon-fiber reinforced plastic keeps the car at a good proportion.

One thing that caught my attention is the light-weight springs made from fiberglass-reinforced polymer. This should save about 40% weight over the original steel springs. You know Audi must have worked hard to develop that since springs pack on a lot of stress. In order to further reduce weight, the wheel hubs use forged titanium with a lightened anti-roll bar 35% lighter than the original.

The lithium-ion battery pack weighs in at 1,272-lb and is used as a load-bearing element thus increasing rigidity and lowering the center of gravity due to its low position. As far as range, Audi still claims over 133 miles, but that is the combined European cycle and 100-105 miles seems more feasible.

So is is a boy or a girl? And that is the question we are all left to ponder. Officially Audi hasn’t said anything but the Fourtitude site seems to think a limited production line will happen. No matter how you look at it, this is a great exercise for Audi to start flexing its electric muscle and eventually jump into the inevitable electricdrive reality with its all-electric R8 e-tron.