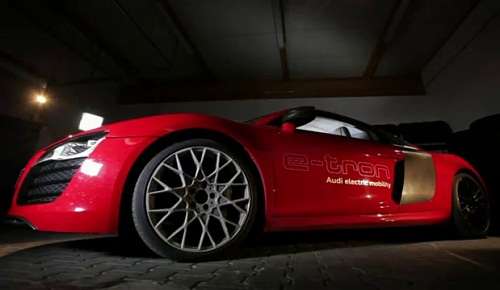 After nixing its electric A3 e-tron, Audi takes out the prettier R8 e-tron and laps best ever electric car lap for a production EV at the Nurburgring.
Advertisement

Audi is an interesting car maker that never stops to intrigue us. At first, it vehemently claimed there was no future with electric cars, then it proceeded to show us an e-tron electric vehicle, EV prototype that stopped everyone in their tracks. Then there were rumors of the possibility of production cars based on it. Then nothing. Finally, it will be coming sometime soon. Then rumors of a plug-in hybrid based on the e-tron… then nothing. Then an electric A3 e-tron… then nothing. And now for the grand finale, the fastest electric car lap at the famous Nurburgring. Audi, you spin my head around.

Audi’s Fastest EV. Audi wants to show us it is still working on pure electric cars. After Toyota’s purpose built EV P001’s record of 7 minutes and 47.79 seconds on the Nurburgring, Audi wanted to set the record straight with a lap record for a production electric car with its upcoming production release of its R8 e-tron electric vehicle. The R8 e-tron blasted the 12.92-mile lap in 8 minutes, 9.099 seconds, barely a second more than Toyota's. This comes right on the tail of the company’s win at Le Mans with its diesel-electric hybrid racers and an indication that the R8 e-tron family might be closer than we expect.

Technically Speaking. The Audi R8 e-tron is not the most spectacular electric car, EV. The 0 to 60 mph is achieved in 4.6 seconds, a little less than a second more than a Tesla Roadster. Its top speed of 124 mph is not Earth shattering either. But for this instance Audi lifted the restrictor to 155 mph so that it could achieve its record on the Nurburgring. The R8 e-tron is no slim weight EV either, weighing in at shy of 4,000 lbs. But it makes up for all of this with its 2 electric motors putting out a healthy 3,614 lb ft of torque to the rear, using traction control electronics to keep the tires on the ground. And yes, that is at the rear of the car not the previous expected 4 wheel drive. The 49 kWh battery pack is stated to give 134 miles of range.

According to Markus Winkelhock who drove it: "the torque with which the electric motors propel the car uphill beats everything that I know -- even if they make hardly any noise in the process, which at the start was really a completely new experience for me. In places where I really need traction, the torque vectoring -- the displacement of the torque between the powered wheels -- really helps me."

It will be interesting to see how Audi wedges the electric R8 e-tron in its portfolio. In the meantime, nothing sells better than best time track for Audi’s R8 e-tron on the Nurburgring.

Tsingshan's Threat to Tesla: EV Maker Is In Battery Crosshairs
Tesla-Funded Research Reveals One of The Biggest Mysteries of EV Battery
END_OF_DOCUMENT_TOKEN_TO_BE_REPLACED