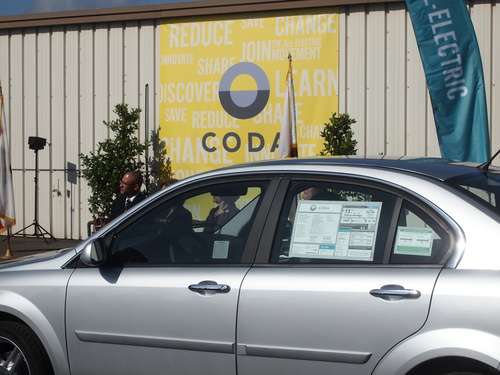 UQM writes off Coda, piling on doubts of Coda's survival

The prospects for beleaguered electric automaker Coda Automotive just went from bad to worse on news that drivetrain supplier UQM has essentially written Coda off. UQM is a Colorado-based maker and supplier of electric and plug-in hybrid drive train systems. According to an SEC filing dated Thursday, Coda has racked up a large debt with UQM and paid nothing towards that debt.

Coda Automotive used UQM's PowerPhase Pro 100 as the basis of the drive train in the company's electric car. Coda's engineers had designed an additional control system to coordinate several systems in the car, including the UQM PowerPhase drive train.

According to the UQM filing with the SEC, the company entered into a 10 year supply agreement with Coda in 2009. The company began deliveries of PowerPhase drive trains in October 2011, and Coda Automotive launched sales in March 2012. Coda Automotive has been tight lipped about actual sales of their electric car, and at a company press event in September company management attempted to reframe the March launch as a "public beta". The August recall (for misinstalled air bags) affected 78 cars, telling us that sales of the Coda electric car had been very slow.

What UQM discloses is that following the March 2012 product launch, Coda's production and delivery of cars to customers "has been at a significantly reduced rate versus initial CODA forecasts" and therefore UQM had "suspended production for CODA and have not shipped any production propulsion systems to CODA." UQM notes that earlier this year Coda had announced they were seeking additional investment "to fund their ongoing operations," but this was unsuccessful and the company is "significantly delinquent in the payment of amounts due to [UQM]." While Coda had paid $1,454,176 to UQM in 2011, they paid $0 during 2012. To top it off, Coda laid off 50 employees in early December 2012, and furloughed a significant amount of the company in early January 2013.

UQM has seen what we might metaphorically describe as "the writing on the wall" and determined "there is substantial uncertainty regarding CODA’s ability to honor their obligations to us under the Supply Agreement."

Because UQM foresaw a credit worthiness risk with Coda Automotive, management had reserved $3,838,092 to cover the risk of nonpayment. UQM recorded a charge in the last quarter of 2012 on earnings of about $3.8 million over Coda's nonpayment. They foresee taking an additional charges in the future related to purchase agreements with their own suppliers. If Coda is able to raise additional funding and get back into production, UQM will be able to supply Coda out of existing inventory.

UQM had reserved inventory for sale to Coda, but have begun selling that inventory to other customers. UQM's management claims they will be able to survive this road bump, because of adequate cash reserves to fund the company for at least 18 months.

UQM had received a $45.1 million grant from the U.S. Department of Energy (“DOE”) under the American Recovery and Reinvestment Act (“ARRA”) for manufacturing electric drive train systems associated with the launch of volume production for CODA Automotive, Proterra, EVI, BEV and other customers.

The issue here is interlocking dependencies between small start-up companies, each of whom are struggling to get a foothold. The electric vehicle market is small enough that the customer list is also small, and UQM notes a risk of being overly dependent on a small number of customers. We've heard that phrase before, for example EnerDel made a similar statement regarding their relationship with Think. EnerDel was an investor in Think, and had ramped up battery production expecting Think to ramp up electric car production, but when Think failed to do so EnerDel ended up in bankruptcy. A similar pattern holds between Fisker Automotive and A123 Systems, where A123 had some financial difficulties because of Fisker's delays in getting the Karma into production, and currently Fisker is being hurt badly because A123's bankruptcy halted Karma production.

Generally, we've always applauded Coda's employees for their devotion to the cause of electric vehicles. An example is the "Grass Station" marketing stunt the company did during August 2012, in which they took over a gasoline station and filled it with electric cars, grass, flowers, musicians, and educational material. At the end of the day, however, Coda's inability to follow through on the company's sales projections puts UQM at risk. That company is left holding a stack of unpaid bills and inventory they'd built for sale to Coda. Even though they're selling that inventory to others, their SEC filing makes it clear this is a financial speed bump.

Anonymous wrote on February 5, 2013 - 3:07pm Permalink
yeah, have a look at their balance sheet, "adequate cash reserves" is not what I would say of UQM. Nor the very quiet downsizing. And as for selling that stock of 500 systems, sure, if you have someone who can use that very specific configuration, you MIGHT sell some.