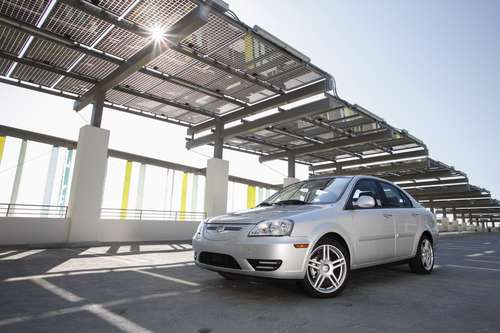 Struggling electric car maker, Coda Automotive, is going through a second round of releasing employees as the company seeks to firm up their financial position.
Advertisement

On Friday, a Coda Automotive spokesperson announced a "furlough" (not technically a "layoff") of employees as the company is attempting to bolster financing to keep the business going forward. This followed a layoff of 50 employees in December, which in turn followed a disappointing crash test safety result and reportedly small sales of the Coda electric car.

Details are scant at the moment as to the number of people affected, and managements plans to fix the company's financial position. The official statement reads as follows:-

"On Friday, January 4th CODA furloughed a number of employees as the Company takes necessary action to bolster its financing and better position the business going forward. The Company has kept in place a sufficient number of staff to keep the Company operational and remains committed to the continued development and distribution of its products. During this period, CODA will continue to provide service to its dealers and customers. While unfortunate, we are confident this temporary action will allow the Company to strategically direct resources towards critical operations and put the Company on a more sustainable path."

Reading between this lines this appears to be a large scale layoff meant to preserve funds while the company reconfigures its product or strategies.

The difference between a furlough and layoff is that the employees can be brought back to work.

The parent company, Coda Holdings, has not had a round of fundraising (selling shares) for almost a year. That round was for $150 million, and according to an SEC filing in early Feb. 2012 they'd sold $22 million of that round. A previous fundraising round, disclosed in an Aug. 2011 SEC filing, targeted $237 million and raised $116 million.

The company never received federal support despite having applied for Dept of Energy Loans in the Advanced Technology Vehicle Manufacturing program that would have helped the company build a battery pack manufacturing facility in Ohio.

Coda has signed an agreement with Great Wall Motors to develop future electric cars expected to begin delivery in mid-2014. Coda Automotive also has a deal with Better Place to provide electric cars for an electric taxi operation for the SF Bay Area slated to go into service next summer.