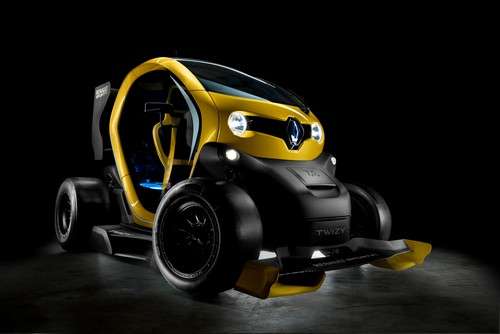 A souped up Renault Twizy, a small urban focused electric car, featuring a Formula 1 KERS system will be touring major events such as the Barcelona Motor Show.
Advertisement

Renault announced today the most unlikely vehicle you could imagine, a version of the Twizy quadricycle souped up with Formula 1 components. The Twizy is a tiny electric car meant for around town urban use, and is the very last thing you'd expect to be souped up with an F1 style KERS system, to give it a blistering 0-60 miles/hr speed.

The regular Renault Twizy has a 13 kilowatt (17 horsepower) electric motor, and a top speed of around 50 miles/hr. It is a two-seater with open sides more resembling a neighborhood electric vehicle than anything else on the road.

To create the Twizy Renault Sport F1, engineers linked a KERS unit to the Twizy's drive shaft. When the driver activates the KERS system it boosts the power level to 72 kilowatts (97 horsepower), adding 80 horsepower, and raising the top speed to nearly 70 miles/hr.

Because the Twizy isn't as fast as an F1 Race Car, the KERS system doesn't recover enough energy from braking to charge the KERS battery. Therefore, they designed the system to tap power for the KERS battery off the main battery pack.

To top off the conversion, the team added a Formula 1 style steering wheel, with the paddle switches adapted to control the KERS, racing style slick tires, and a carbon fiber "wing".

KERS, or Kinetic Energy Recovery System, has been a part of Formula 1 racing since 2009. KERS units incorporate an electric motor-generator unit (MGU) directly connected to the driveshaft, a specific lithium-ion battery pack, and a KCU (KERS Control Unit). During braking it acts as a souped up regenerative braking system, capturing energy that can be released later to boost speed out of corners. The motor-generator unit acts as both parts of this equation, because electric motors can also serve as electric generators.

Renault's KERS project leader, Laurent Debailleul, had also worked on the Twizy's electric motor. The shared technology between the F1 KERS system and electric cars is the electric motor, after all. One thing led to another, and that connection led to the Twizy Sport F1 project being approved at the highest level of Renault.