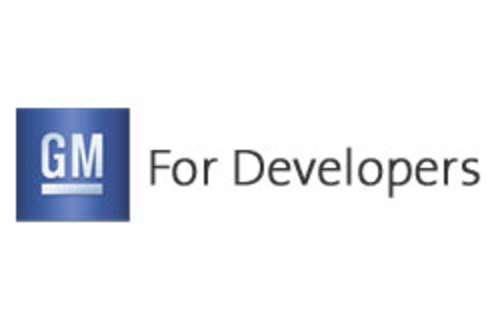 GM's developer API program, unveiled at CES in January, is starting to bear fruit, with over 2300 developers registered at the GM Developer Portal. Multiple applications are now available, with app ideas popping up at a steady pace.

The target is the GM AppShop, which will be built into the Infotainment system beginning with the 2014 model year. It allows car owners to select from GM-approved applications, running them in the dashboard just as smartphone owners run apps on their cell phones. Just as the cell phone has transitioned from "just a phone" to a be a "mobile computing device, with a telephony app built-in" cars might one day transition to "mobile computing device, with driving capabilities built-in".

Because no cars currently exist with the AppShop built-in, developers are writing apps using simulated devices. Some applications use Remote API's with simulated OnStar connectivity to remotely connect with a virtual car. Other applications are meant to run inside the dashboard, and those are developed using familiar HTML5 and JavaScript technology. That technology is widely used in smartphone applications, and allows a developer to reuse application code more easily, allowing the same app to run on multiple devices.

“We have developed and designed connected vehicles and with that connectivity there’s tremendous range of what can be done with them,” said Nick Pudar, GM director, developer ecosystems, Global Connected Consumer. “There will probably be in-vehicle apps that are popular for everybody, but there will also be a range of apps useful to very targeted segments.”

The car app market is a brand new marketplace, unlike the crowds of smart-phone applications now available. By supporting HTML5 and JavaScript, the GM application platform is instantly accessible to developers allowing them to quickly develop apps for GM cars. That then should benefit the car owners by making a large set of apps available.

“It can be very difficult for a new app developer to get noticed or become relevant,” said Pudar. “Since our marketplace will be carefully curated for apps that are meaningful and appropriate for the driving experience, each available app will have much greater visibility. Couple that with the fact that on average we spend about 90 minutes a day in our vehicles, and you have a captive audience.”