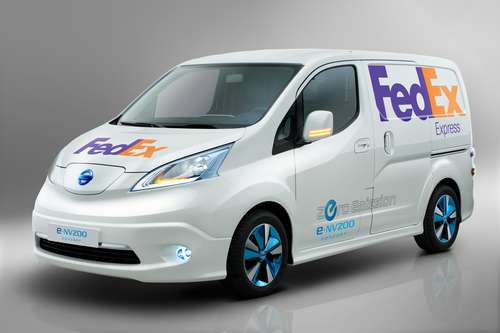 FedEx has been testing Nissan's futuristic e-NV200 electric cargo van since December 2011, and the pilot program is expanding globally ahead of the e-NV200's production launch in 2013.
Advertisement

FedEx is expanding a program with Nissan in which the two companies are testing Nissan's electric van, the e-NV200, configured as a panel van, and for use in package delivery. The latest concept version of this vehicle was unveiled today at the 64th IAA Commercial Vehicle International Motor Show in Hanover.

The e-NV200 is a commercial van, an electric version of the NV200 outfitted with electric drive train technology borrowed from the Nissan Leaf. When development is complete this will be Nissans second all-electric vehicle, after the Nissan Leaf.

Fleet owners are especially positioned to take advantage of the fuel and maintenance savings of electric vehicles. Electric vehicles are cheaper to fuel than gasoline or diesel, and the savings are racked up faster for a fleet vehicle than it is for regular drivers.

Nissan and FedEx have been working on the e-NV200 since December 2011 in real world operations. FedEx currently has 130 electric delivery vehicles in use around the world, and is strongly committed to reducing the environmental impact of that company's vehicle fleet. The company is using what it calls a "holistic approach" to fleet management for increasing fuel efficiency and lowering emissions, and has already achieved 80% of the corporate 2020 fuel efficiency goal.

Testing began in London, in December 2011, and recently expanded to Yokohama Japan. Testing is also expanding to Singapore, the USA and Brazil. Testing feedback is slated to be used by Nissan in gauging whether they have met customer requirements before production begins in 2013.

The e-NV200 is the second of four planned all electric Nissan models. It combines the electric drive train of the Nissan Leaf with the spaciousness of a cargo van. In addition to reducing pollution, and saving money on fuel, the e-NV200 has smooth and quiet driving characteristics making it more pleasant for drivers, and suitable in areas where noise is an issue. Because it uses the Leaf electric vehicle system, the e-NV200 will be outfitted with CHADEMO fast charging capability making a longer working day feasible.

The e-NV200 was selected last winter to be part of New York City's future taxi fleet, under what that city calls "The Taxi of the Tomorrow". Currently six Nissan Leaf's are being used as Taxi's in NY City to test the concept. In May the e-NV200 won the Fleet World Honors eco award.

"As a global fleet operator, FedEx Express is always looking for measures to improve the efficiency of its vehicles," said Russell Musgrove, managing director Global Vehicles, FedEx Express. "Through the development and deployment of innovative technologies, FedEx Express has continually improved the energy efficiency and reduced the environmental impact of its fleet. We are delighted to collaborate with a global player like Nissan in the development of an urban all-electric delivery van."