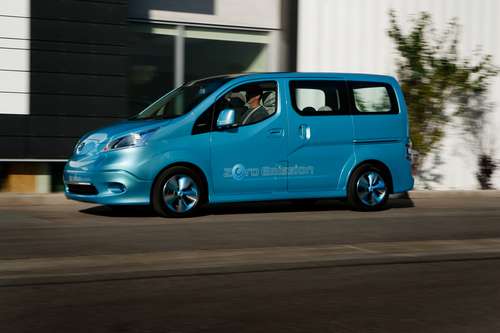 The NV200 is Nissan's flexible multi-purpose vehicle, with the e-NV200 slated to be its zero emission electric model starting in 2017.
Advertisement

Nissan's e-NV200 electric "multi-usage vehicle" (a.k.a. commercial van) was unveiled today in Detroit at the North American International Auto Show. It is an all electric version of Nissan's popular NV200 van, and is of particular interest as the chosen vehicle for New York City's Taxi of Tomorrow program.

The Taxi of Tomorrow program is meant, over a period of several years, to replace New York City's existing taxi fleet with vehicles purpose designed to serve as taxi's. An additional goal was for a portion of that taxi fleet to be zero emissions vehicles (electric). After a period of collecting requirements, and entertaining proposals from automakers, the New York City's Taxi and Limousine Commission chose the NV200 with the understanding that beginning in 2017 they will begin to deploy electric NV200's in the fleet alongside gasoline powered NV200's. In the meantime a fleet of six Nissan LEAF's are being deployed in a couple months to Taxi service in New York City. (see NYC deploying six Nissan LEAF's in Taxi of Tomorrow pilot program)

The electric e-NV200 being shown in Detroit is essentially a Nissan LEAF drive train installed in an NV200. “With its ‘no gas, no tailpipe, no emissions’ powertrain, the Nissan e-NV200 Concept combines a quiet, comfortable driving experience with a large, highly versatile, functional interior space within a compact overall body length,” said Hideto Murakami, corporate vice president, Nissan Motor Co., Ltd. “A potential game changing vehicle in its segment, the battery capacity will support a driving range similar to the Nissan LEAF, while payload and cargo space will offer the same level as the current NV200.”

The Nissan NV200 is a flexibly configurable multi-purpose van. It has one row of seats up front for driver and passenger, and a rear area which can be configured for a variety of uses such as cargo carrying or by installing rows of seats to carry people. It has a tall roofline and a sliding door on the side allowing for easy entry and exit, one of the requirements collected in the Taxi of Tomorrow program. The NV200 won the 2010 International Van of the Year award for Nissan, the 2011 Universal Design Award from Universal Design GMbH, and the CDV of the 2010 Year award in China.

The e-NV200 retains the shape and design of the gasoline powered NV200, while incorporating elements from the Nissan Leaf. One element is the charging ports located on the nose. This makes the front face of the e-NV200 look amazingly similar to the LEAF. The dashboard includes features Nissan describes as "advanced telematics and a flat C-cluster display that resembles and responds to user input like a tablet computer" (we assume they mean the display is touch sensitive).

It has a front wheel drive high-response 80kW AC synchronous motor that generates 207 lb-ft (280 N-m/rpm) of torque. As an electric drive we wonder what the taxi drivers will do with instantaneous torque.

An initial trial of the e-NV200 occurred in the summer 2011 by the Japan Post Service, with a single prototype vehicle used for delivery and collection duties in Yokohama, Japan. Additional testing began in December in London by FedEx, clearly looking to use it for delivery duties in Central London.

Nissan describes the e-NV200 as a "near-future production" vehicle however it's understood the e-NV200 for NYC's taxi program will not be deployed until 2017. The gasoline powered NV200 is expected to be deployed in late 2013.

David Bonis wrote on January 10, 2012 - 7:58am Permalink
Mayor Bloomberg must really hate New York to have chosen this hideous looking vehicle? This is the Taxi of Tomorrow? Looks more like a Ray Charles/Stevie Wonder collaboration, no wait those guys are artists and would have never designed this and called it the vehicle for NYC. What about the poll NYC held where NYers overwhelmingly chose the other vehicle that had universal design cues.