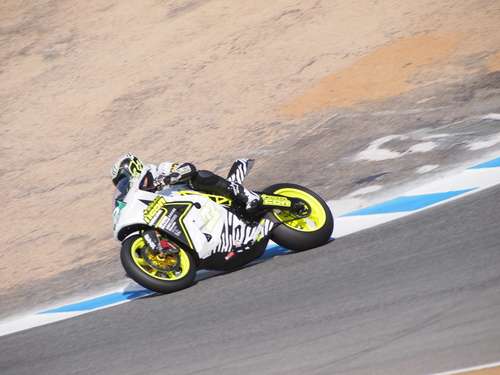 Electric motorcycle racing came to the Laguna Seca MotoGP weekend for the fourth year in a row, and Brammo nearly took 1st and 2nd place, but after a series of mishaps the results were far different than expected.
Advertisement

Eric Bostrom won the eRoadRacing World Cup electric motorcycle race at Laguna Seca this weekend, after his team-mate Shane Turpin led the full race, but failed to finish the race. The results diverged strongly from what we expected after Saturday's qualifying round, thanks to a race that saw four out of the eight riders crash or otherwise fail to finish.

For most of the race, Shane Turpin (who is knew to Team Icon Brammo), led Bostrom and turned in strong lap times in the 1:32-1:33 range. While he and Bostrom are riding electric motorcycles, those lap-times would be mid-pack in the AMA Superbike series. Turpin even broke the lap record for electric motorcycles at Laguna Seca during race conditions, with a 1:32.581 lap time beating Steve Rapp's (Mission Motors) record of 1:33.194 in 2011. Rapp's other record, a 1:31.376 lap time set during qualifying in 2011, still stands. However, Turpin failed to finish because the battery pack ran out of juice in the last half of the last lap. A note to the rider, you want the pack to run out of juice AFTER crossing the finish line, not before.

That left Bostrom to win the race after putting in a great performance and consistent lap times in the 1:33-1:35 range. His best lap time, 1:33.012, also beat Steve Rapp's race lap record from 2011. Both Bostrom and Turpin were hitting 135-140 miles/hr in the front stretch.

However in their first lap Moreda and Rich crashed out in the corkscrew thanks to slightly damp track conditions due to fog that had just lifted before race time. Moreda lost traction in the corkscrew, and went sliding, badly scraping the right-hand side of her bike. Ted Rich was following directly behind and ran into her bike sending both out of the race. Jeremiah Johnson was following directly behind them, and barely avoided having his own collision.

Kenyon Kluge is a Zero Motorcycles employee, leading the electrical engineering team, and also holds an AMA racing license. With Bostrom, Moreda and Rich out of the race, he was free to take 2nd place. The majority of his laptimes were in the 1:50-1:52 range, with his best lap time of 1:48.706 occurring in the second lap.

Jeremiah Johnson is an AMA pro racer with a long career, and he took 3rd place. His lap times were in the 1:52-1:55 range, and he finished about 25 secs behind Kluge. Both were riding 2013 Zero S's with similar modifications.

Arthur Kowitz is an AMA pro racer with a history dating back to the 80's and more than a few wins under his belt. He recently bought an Empulse R and an Empulse TTX, the latter to go racing with, out of seeing electric motorcycles as the future. His lap times were consistently in the 1:55-1:56 range, and he finished about 20 seconds behind Johnson.

Brandon Nozaki-Miller also entered, but crashed out in turn 3 of the second lap.

The eRoadRacing World Cup is a successor series to both the TTXGP and e-Power electric motorcycle series. It replaces both series, and is sanctioned by the FIM.