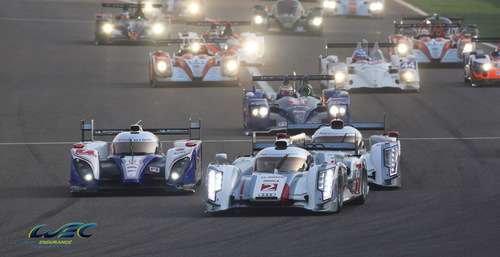 In the World Endurance Championship, 2012 is turning out to be the year of the hybrids, with Audi continuing their winning streak taking 1st and 2nd at the 6 Hours of Bahrain after Toyota crashed in the 5th hour.
Advertisement

The hybrid race car dominance of the FIA World Endurance Championship race series continued with Audi's R18 e-tron quattro claiming both 1st and 2nd place in the 6 Hours of Bahrain on Sunday. The other hybrid race car in the series, Toyota's TS030, retired from the race due to an accident after leading for most of the race.

This is the year of hybrids in the WEC series, with Audi's and Toyota's hybrid race cars handily beating the traditionally powered racers. As if to underscore this, Audi chose for the Bahrain round to race with two R18 e-tron quattro hybrid race cars. In previous 2012 WEC races Audi had brought one R18 e-tron quattro and one traditionally powered R18 Ultra. But the R18 e-tron quattro has outraced the R18 Ultra, no doubt convincing Audi to switch to a full hybrid lineup. In a pre-race interview Dr. Wolfgang Ullrich (Head of Audi Motorsport) said "We decided to compete with two hybrid vehicles in Bahrain. Our analysis has shown that we’ve got an advantage in traffic with the R18 e-tron quattro. It makes it easier for our drivers to overtake other vehicles. This means that with two hybrid vehicles we’re in a better position in the battle with Toyota."

The Toyota TS030 hybrid race car, entering the WEC field late in the season, already racked up a 2nd place and 1st place finish, the latter at the 6 Hours of Sao Paulo. Clearly Audi is taking seriously the challenge from Toyota.

The Toyota TS030 led the race for the first two hours and had its first setback during hour three during a lengthy pitstop to repair a lighted number plate. This put the team four laps, in fifth place, and driving furiously to catch up with the two Audi's in the lead.

The Audi team described the Bahrain race as "the toughest 6-hour race of the year so far." In addition to the stiff competition from Toyota, there was the heat, with ambient temperatures at 34 degrees C and track temperatures at 45 degrees C.

The nr1 Audi R-18 e-tron quattro delivered a nearly flawless race. André Lotterer (Audi R18 e-tron quattro #1): “First and second place is a top result for Audi. In the beginning it wasn’t an easy race for me. I drove a double stint and managed to catch up with the Toyota again. I was able to close the gap up to twelve seconds but was very exhausted then. But we exerted pressure. Maybe our rivals took a higher risk as a result and in the end retired due to a mistake. It went superbly. A brilliant performance by the team and by my team-mates.”

The nr2 Audi R-18 e-tron quattro had a few problems with headlights that had to be replace three times. Tom Kristensen (Audi R18 e-tron quattro #2): “An outstanding one-two result in the desert in really tough conditions. It was a big challenge for our competitors and for us. Car number 1 delivered a perfect performance – congratulations on that. Unfortunately, we had to change the hood three times and suffered a puncture. Before I got into the car we were already one lap behind. Considering this, second place is a good result. And after all, we’re the best driver squad to finish with only two drivers! The mechanics did a fantastic job of converting the ultra into the e-tron quattro as well during the event.”

Both the R18 e-tron quattro's were significantly faster, finishing 6 laps ahead of the nearest competitor.

Ralf Jüttner (Technical Director Audi Sport Team Joest): “The race didn’t seem to me like a 6-hour race but like 24 hours because there was so much happening. For the drivers, it was extremely rough. We once tried a double stint with André (Lotterer) but realized that that was really pushing the limits. That’s why we opted for shorter stints again, with respect to the drivers as well as the tires. That was exactly the right decision. Positions one and two are sensational. Getting both cars to finish without heat-induced problems is really a solid achievement.”

Tesla Contemplates A New Strategy for China Retail even As Sales Boom
Jay Leno on Elon Musk & EVs: “I Think He Should Get ... Credit"
END_OF_DOCUMENT_TOKEN_TO_BE_REPLACED