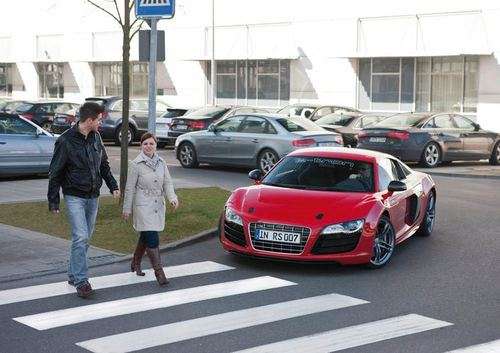 Audi's upcoming electric supercar, the Audi R8 e-tron, promises to not only be an exciting electric car, it will have a unique sound thanks to an engineering effort to craft an artificial sound signature that supposedly says "Audi".
Advertisement

The last couple years a small controversy has dogged electric cars development. Some claim electric cars are too silent, and that the silence presents a danger to pedestrians, bicyclists, the blind, and others. As a result of these claims of dangerously quiet electric cars, efforts are underway to add unnecessary noise to electric cars as if that will make them safe for pedestrians and bicyclists. Audi posted a video today on YouTube talking about their efforts to develop the correct sound for the Audi R8 e-tron, and their work with an honest-to-goodness composer to develop the Audi sound. Audi describes this project as both an effort to produce enough sound for pedestrian safety, and an effort to brand Audi electric cars with a sound befitting that company's heritage.

The silent electric car faux controversy began in (or before) 2009 when activists for the Blind raised concerns about hybrid and electric cars, claiming these new cars presented a danger to the Blind. While electric cars tend to be quieter than gasoline cars, cars in general are becoming quieter every year because of better engineering. The continuing carnage of pedestrian and bicyclist deaths or injury by noisy vehicles undermines the argument that it is quiet cars that are dangerous. And what of the potential for electric cars to resolve the noise pollution that is plaguing our cities? The din of noise degrades the quality of life of city dwellers, and is thought to negatively impact the emotional state of those living with the noise. Back in 2009 NoiseOFF described lobbying efforts by the National Federation of the Blind as "racing to develop a solution to a non-existent safety problem" and "astroturfing the issue of pedestrian safety". The concerns were a bit over-hyped, and based on questionable reasoning, but most electric vehicle activists did not think this rose to the level of necessitating a fight against the calls for electric cars to make more noise. Nevertheless, the Pedestrian Safety Enhancement Act of 2010 requires the National Highway Traffic Safety Administration to ensure that electric and hybrid car manufacturers add noises meant to alert pedestrians and the blind.

Electric vehicles are not exactly silent, they're simply quieter than gasoline cars. The remaining sound is made by tires, the controller, the electric motor, and some of the mechanical bits on the car. It's quite possible to add speakers to an electric car to artificially make it emit any desired sounds. One could even imagine a market of car sounds much like some go overboard in finding the right ring tone for their cellphone. The question is, what (if any) sound should an electric car make.

Audi has hired a music composer, Rudolf Halbmeir, to create the sound of the Audi R8 e-tron. He and other Audi engineers describe this as a cars sound being similar to music, that can be designed for a desired effect, with low-range frequencies suggesting power and composure, while mid-range frequencies emitting sportiness and agility. Where the sounds of gasoline powered cars are an unfortunate side effect of the explosions happening in the engine, the sounds of an electric car can be created, designed, and manufactured to suit the marketing departments whims. It makes one think of that peculiar obnoxious sound made by Harley-Davidson motorcycles, and while the sound was originally a byproduct of the engine design, it is today cultivated by H-D as part of the company's image, and has been adopted by the culture of H-D's customers.

Halbmeir is shown in the video below with a music workstation and a range of specially constructed computer input devices to aid in composing the sounds emitted by the Audi e-tron. Among the specially constructed facilities is an acoustic test bed, comprising a room with sound-absorbing tile built into the wall, a dynamometer in the floor, and banks of microphones to gather acoustic data. Halbmeir and other Audi engineers used this test bed and other instruments to aid them in designing the e-tron's sounds. Audi is seeking a sound that expresses "the Audi sound", whatever that is, reflecting the emotional feelings Audi thinks represent the company's cars. Additionally each model in the e-tron line will emit its own unique sound signature.

The soundscape designed by the Audi team is emitted from a small speaker attached to the Audi e-tron's undercarraige. The speaker is rated for 40 watts, but during operation the speaker operates at 5-8 watts. This is loud enough for nearby pedestrians, and thankfully not so loud as the annoying BEEP-BEEP of the backup alarms on commercial trucks.

Audi undertook this in part because of the U.S. law requiring additional noise, and in part because the unmodified R8 e-tron sounds were "too quiet" and "its high frequencies are not exactly melodious". It's possible Audi may have made this effort to design the Audi R8 e-tron sound regardless of any government regulation.