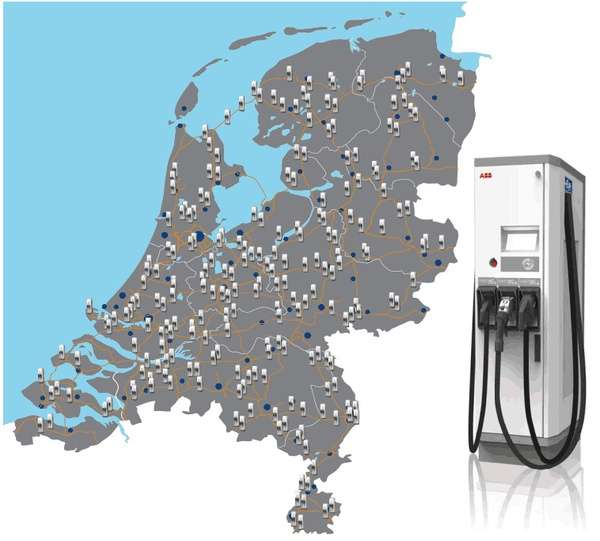 ABB's charging stations are being deployed in national-scale charging networks in at least Estonia, Denmark, Northern Ireland, and The Netherlands. “To support the rollout of nationwide charging networks in Estonia, Denmark, Northern Ireland, The Netherlands and more to come, we’ve been relentlessly focused on adhering to industry-leading public standards of connectivity, quality and reliability. CE certification by an independent certification body is a clear recognition of our commitment to these principles and demonstrates the robustness and high level of safety of our new and already installed public and private charging stations” said Hans Streng, Senior Vice President and General Manager of ABB’s EV Charging Infrastructure Product Group.

However the ABB Terra 53, by supporting all three of these standards, gets around that problem. The electric car driver simply plugs in the charging cord that's compatible with their car.

In each of these cases typical electric cars can snag an 80% recharge, for 60-70 miles of range, in a half hour or so. This makes electric cars more flexible than if the recharge required 3-4 hours to finish.

ABB recently participated in BMW and Volkswagen’s Interoperabilty workshops with the Terra 53 and demonstrated successful charging of the next generation of CCS compatible EV’s. Most recently, BMW used ABB’s Terra 53 at the IAA Live-Drive event in Frankfurt to charge the BMWi3.

The Chevy Spark EV and the BMW i3 are the first CCS-compatible electric cars on the market, and more are expected over the coming years. The Renault ZOE and the 3rd generation smart ForTwo Electric Drive both support the 3 phase AC fast charging system. Over the course of the next few years it's expected the balance of fast charging standards to shift from the CHAdeMO system that primarily supports the Nissan Leaf, over to the CCS or three phase AC systems.