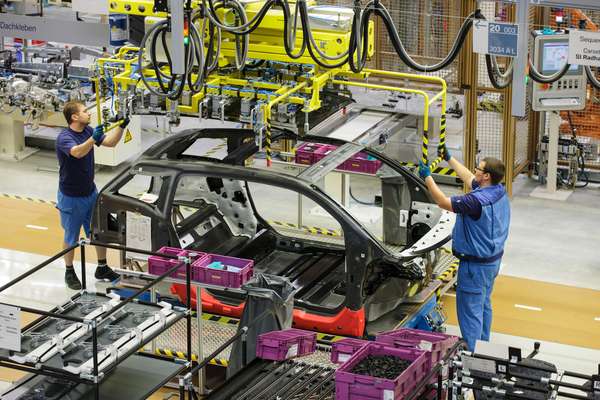 The BMW i3 premium electric car, BMW's first attempt at production EV's after a few years of prototype electric cars, has begun production ahead of starting deliveries to customers in November.
Advertisement

BMW's first production all electric car, the BMW i3, came a step closer to reality yesterday when the company began "serial production" ahead of first deliveries to customers in Europe starting in November. Not only is this BMW's first production EV, the company claims to be making history in other words, such as claiming the BMW i3 is the first premium electric vehicle purpose-designed for electric drive, and that ground-breaking technologies allow BMW to lay claim to a far more sustainable manufacturing process. We think that Tesla Motors may want to quibble about whether the i3 is the first purpose-designed premium electric car, but their manufacturing process has some interesting sustainability aspects to it.

A key part of the BMW i3 design is the use of carbon fiber reinforced plastic (CFRP) for major body structures like the passenger compartment skeleton. Carbon fiber has always been very expensive, limiting its use to high value vehicles like jetliners, space ships, and race cars. Carbon fiber is attractive because it is ultra low weight while being extremely strong, but the prohibitive cost has kept it from being used in mass production vehicles.

BMW developed a production process to mass-manufacture CFRP materials. That process begins with Mitsubishi Rayon-SGL Precursor Co. Ltd. in Otake, Japan, who then ships material to the SGL Automotive Carbon Fibers factory in Moses Lake, Washington where the material is worked to become carbon fibers, and finally those fibers are shipped to BMW factories in Germany to create body parts.

Using CFRP materials means the i3 uses less energy to perform its task than if it were made of steel or even aluminum. By industrializing the CFRP manufacturing process, the BMW Group has become the first company worldwide to use CFRP in viable large-scale vehicle production economically.

Other sustainable aspects of the BMW i3 manufacturing is the use of hydro-electric electricity to produce the CFRP, as well as water recycling, wind power and solar power at BMW's factories in Germany.

“Today represents a milestone in our company’s development,” said BMW production chief Krüger. “We are making history with the BMW i3. Not only is our first electric car about to hit the road, we are also completely redefining sustainability with regard to personal mobility thanks to groundbreaking technologies and processes.” Indeed, the entire value chain is firmly committed to sustainability and efficiency: “We require 50% less energy and 70% less water, and source the electric energy for production of the BMW i models CO2-free from the wind turbines at the plant,” added Krüger. This huge reduction in energy and water consumption can be attributed primarily to the elimination of the traditional painting process for steel and aluminium bodies.

Stanislaw Tillich was delighted that this new chapter in automotive history would be written in the federal state he heads: “I’m proud that, in BMW, we have such an innovative carmaker here in Saxony and that BMW is building the i3 at its plant here in Leipzig. This proves that Saxony is an attractive location in terms of its research and educational institutions, its infrastructure and, most importantly, its highly qualified and motivated people.”

The first BMW i3 off the line was earmarked to be the lead car for the International Berlin Marathon on 29 September, and delivered to German marathon runner Jan Fitschen.

In the past, BMW developed two prototype electric cars, the Mini-E and ActiveE, to test customer acceptance and guide the design of not only the i3 but the BMW i8 plug-in hybrid sports car that's also due to start deliveries soon.

Deliveries of the BMW i3 to customers in Germany and other European countries will begin in November, with the car’s launch in the USA, China and other markets to follow in early 2014.