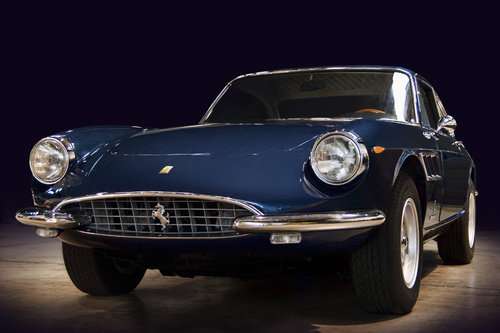 A unique auction is going to take place in early 2012 as 1967 Ferrari 330 GTC will be put on sale by Russo and Steele this January.
Advertisement

There are a lot of cars on the consignment list for Russo and Steele’s 12th Annual Scottsdale Arizona Auction, to be held January 18-22, 2012. While every single one of those cars is probably on some collector’s wish list, some stand out more than others.

Consignment #1031, a 1967 Ferrari 330 GTC, was actually meant to be Ferrari’s version of a daily driver. The 330 was originally announced by Enzo Ferrari at the company’s 1964 press conference, and first appeared before the public at the 1966 Geneva Motor Show. The car’s body was designed by Pinninfaria, and was influenced by the 275 GTS Spyder and the 400 Superamerica. In fact, it shared a chassis with the 275. It used the same 300 horsepower 4.0 liter V-12 as the GT, connected to a five-speed transaxle. As you might expect from Ferrari, the car was considered high-tech at the time, with such features as four-wheel disc brakes and a four-wheel independent suspension.

According to Russo and Steele, “The Ferrari 330 GTC model has become highly coveted by enthusiasts for its ease of maintenance, driving proficiency and manners along with the high level of comfort amenities that were introduced in this model. As a result, 330 GTCs have proven to be the Ferrari of choice for many of the driving events now gaining huge popularity worldwide. From the Copperstate 1000 domestically to the prestigious Italian Mille Miglia’s Ferrari Experience Tribute – few can conceive of a more worthy candidate to thoroughly enjoy both these fantastic driving events but to also drive in style with the ultimate road touring Ferrari!”

The particular Ferrari 330 GTC offered by Russo and Steele comes with air conditioning, a desirable option for long road trips. It’s had a lot of recent restoration work done, putting it in concours condition. Russo and Steele advise that it’s been repainted in Sera metallic blue. The brightwork has been replated. The interior, in tan leather with blue wool carpets, has been refreshed. The mechanicals have been thoroughly gone over, including reconditioning the power train, rebuilding the engine and part of the gearbox, rebuilding the brakes and putting in an all-new wiring harness. Everything’s been inspected and checked, so whoever buys it should be able to just drive it off the lot, though the air conditioning system will need recharging.

A similar car online sold for around $130,000. Should be interesting to see what this one fetches at auction.

Photo courtesy of Russo and Steele.

LG's New EV Battery Plant Is a Welcome News for Tesla
Tesla Giga Berlin's New Hurdle: It's Not Only the Gov't, but Now Tesla Itself
END_OF_DOCUMENT_TOKEN_TO_BE_REPLACED