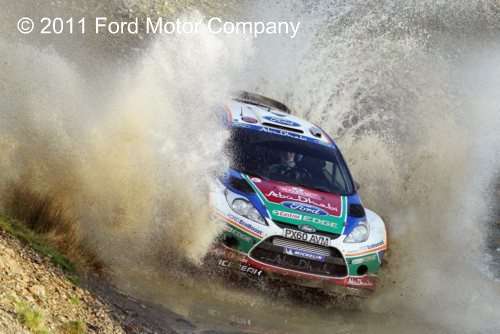 Ford announced today that it will be continuing to participate in the FIA World Rally for the next two seasons, using the services of British-based preparation company M-Sport, which has been running Ford’s WRC program since 1997. It will continue using the Fiesta RS World Rally Car that it debuted so successfully this year. The Fiesta RS is based on Ford’s Fiesta road car.

Ford has named Jari-Matti Latvala and his co-drive Miikka Anttila as team leaders for 2012 after their stellar performance this year. The two Finns were at the top of the list for special stage victories this year and Ford Fiestas actually took eight out of the top ten places at this year’s Wales Rally GB. That includes first, second, and third place, with Latvala nabbing the top spot.

Also driving for Ford in 2012 will be former world champion Petter Solberg and co-driver Chris Patterson. Castrol will continue to support Ford’s efforts in 2012 and 2013.

The FIA World Rally Championship claims to be “the most challenging motorsport competition in the world.” Given the varying road and weather conditions competitors have to deal with, they could well be right. I think rallying demands a lot more out of cars and drivers than other forms of racing, while being a more accessible sport than Formula 1 for example. Most of us could never afford a race car, but rallying, at least at the lower levels, is achievable.

Ford’s done well for itself on the world rally state. It has 79 world rally victories, making it second only to Citroen, with 80 wins. “Ford has a rich history in world rallying and we’re excited to continue fighting for titles on the world stage with our great partners at M-Sport,” said Ford of Europe chairman and CEO Stephen Odell. “WRC is a great fit with the Ford brand DNA of precise handling, fun-to-drive cars with leading technology and we’ll continue to leverage rallying to inspire innovation in future vehicles and reach new audiences.”

Added Gerard Quinn, Ford of Europe’s senior manager for motorsport, “We have a great team with M-Sport and its leader, Malcolm Wilson, and in Jari-Matti Latvala we have one of motorsport’s rising stars. Already regarded by many as the fastest driver in WRC, this year he showed consistency and expertise on all surfaces. We believe he will flourish in his new role as Ford’s team leader, and look forward to seeing his pace light up the special stages around the world.

“The addition of Petter Solberg to the team brings one of the sport’s most experienced and flamboyant drivers back to the team where he started his top-level career. A drivers’ world title and 13 world rally victories are testament to his abilities and his vast experience will be a great asset to our line-up,” continued Quinn.

There are five different models of Fiestas to match five different levels of drivers, and M-Sport will be bringing new drivers through their program with a view to providing Ford with future champions. Judging by past results, they have a good chance of doing exactly that.

LG's New EV Battery Plant Is a Welcome News for Tesla
Tesla Giga Berlin's New Hurdle: It's Not Only the Gov't, but Now Tesla Itself
END_OF_DOCUMENT_TOKEN_TO_BE_REPLACED