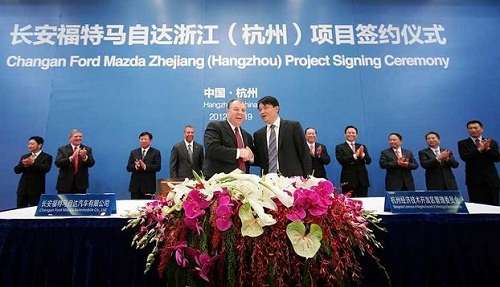 Ford is expanding it's operations in China with a large investment of $760 million into a new plant in Hangzhou.
Advertisement

This is part of Ford's largest expansion in 50 years and the new state-of-the-art assembly plant will double Ford's production capacity in China to 1.2 million passenger cars a year by 2015, when the plant should be completed. That's a whole lot of cars!

Ford and is doing this along with joint venture parnter, Changan Ford Mazda Automobile (CFMA). The $760 million invest brings Ford’s total investment in China to approximately $4.9 billion since 2006.

China is becoming an increasing important foreign market for all major automotive brands. Many feel this is the right move by Ford, which is playing a bit of catch-up in China to General Motors and the Volkswagen Group.

The Hangzhou plant announcement comes just two weeks after Ford said it will invest $600 million to expand capacity at its Chongqing operations. This expansion will enable Ford to build 350,000 passenger cars,

"These are incredibly exciting times for Ford in Asia,” said Joe Hinrichs, president of Ford Asia Pacific and Africa. “So far, Ford’s investments in China and across Asia represent its largest and most rapid global expansion in fifty years. This expansion will help us realize an increase in global sales by about 50 percent from 2010 to about 8 million vehicles annually by mid-decade.”

Construction of the new plant in Hangzhou will begin later in 2012, with the first vehicle coming off the line in 2015.

“The Chinese auto market remains one of the most vibrant in the world,” said Dave Schoch, chairman and CEO of Ford China.

In addition to the recently announced capacity expansion project in Chongqing, CFMA already operates two assembly plants in Chongqing. There is also a new engine plant as well as a transmission plant currently under construction, which makes Chongqing the largest manufacturing location for Ford outside it's home turf of Michigan. The CFMA-Ford joint venture also has an assembly and an engine plant in Nanjing, China.

So the Hangzhou plant will further complement Ford’s large and extensive manufacturing base in China.