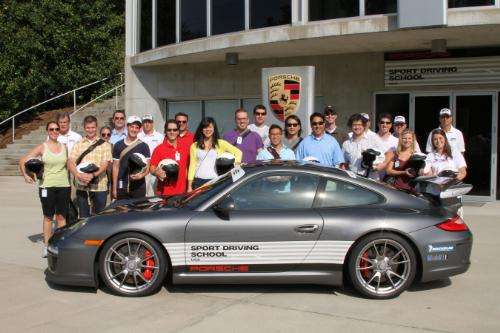 Porsche Cars North America is hosting an amateur filmmakers competition called "My Daily Magic". This is a national contest that Porsche is launching in combination with its "Engineered for Magic. Every day" campaign.
Advertisement

Hundreds of future ambitious and hopeful filmmakers submitted their work to Porsche Cars North America and only ten very lucky aspiring filmmakers have been chosen as finalists. To qualify for the Porsche Cars North America competition, each filmmaker was asked to create a 60-second film that features his/her personal perspective and interpretation of "everyday magic." Porsche has become very creative to help not only their brand, but aspiring filmmakers as well.

Public voting begins today to choose the winner. Those who wish to vote for their favorite film can go to www.MyDailyMagic.com from September. 12-21, 2011 to cast their selection. The top ten chosen filmmakers in Porsche’s contest are competing for some incredible prizes. They are not only seeking recognition and notoriety for their creative films, but will get a very expensive toy as well.

The ten filmmakers who advance to the finals in the Porsche Cars North America competition will be invited to attend the Porsche Sport Driving School in Birmingham, Alabama, where they will get first-hand experience behind the wheel of a Porsche on the track. This is meant to give them great inspiration for yet another challenge, which will be making a second film.

The winner’s grand prize for coming in first place in Porsche’s competition will be having a screening of his/her 90-second film on the Reelz Channel on October 4, 2011. It will also be shown at Landmark Theaters across the country beginning October 7, 2011. The winning film will be premiered at a red carpet event at the Downtown Independent Theatre in Los Angeles. Lastly, the lucky winner will also get a one-year lease of a Porsche 911 (or the cash equivalent) and a two-day VIP invitation to a red carpet premiere of their film in Los Angeles.

According to a press release, the “everyday magic” theme and this filmmaking competition are being used as, “a part of a larger campaign designed by Porsche to challenge perceptions that sports cars should be reserved for Sunday drives or special occasion jaunts.” To drive this point home even more, Porsche wants to prove that, “the thrill of high performance and everyday practicality aren't mutually exclusive, Porsche has been showcasing the dimensions of the iconic Porsche 911 and the brand's other storied sports cars through the lens of passionate daily driving.”

Tesla Giga Berlin's New Hurdle: It's Not Only the Gov't, but Now Tesla Itself
Teslas Are Sold Out Until 2023, But The Timing May Reverse
END_OF_DOCUMENT_TOKEN_TO_BE_REPLACED