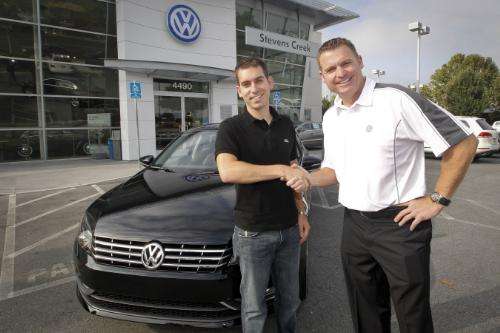 The very first 2012 Volkswagen Passat TDI Clean Diesel was delivered today to its first customer at Volkswagen of America, Inc. in San Jose, California. Volkswagen fans have been waiting for months in anticipation to see this new vehicle.
Advertisement

The 2012 Passat TDI Clean Diesel started to become popular when its advertisements began to air. The first 2012 Passat ad was entitled, "The Force" and aired earlier this year. That advertisement began what was to become an air of excitement to see the actual car up close and personally.

In a press release, Marc Trahan, Executive Vice President of Group Quality at Volkswagen of America made this statement: "We are very excited to share this seminal moment for Volkswagen in America with Mr. Duchesne. It is the fulfillment of our promise to the U.S. market that we can deliver a German-engineered car with American sensibilities at an affordable price. This 2012 Passat comes equipped with our TDI Clean Diesel engine of which we're so proud."

The new VW Passat TDI Clean Diesel is the only midsize sedan that offers German engineering at an affordable price. The new Passat come equipped with premium features that are exclusively offered in the United States only.

The delivery of the 2012 VW Passat TDI Clean Diesel is being made into an honorary event from the plant in Chattanooga, Tennessee to its customer. The Tennessee plant is sending the customer, Mr. Duchesne and a guest to Chattanooga, Tennessee for a VIP tour of the all-new facility where the Passat was manufactured. The customer will be arriving in Tennessee in early November. Part of this celebration is for the Chattanooga plant, which rolled out its 10,000th all-new Passat last Thursday, September 8, 2011.

Mr. Duchesne will also be receiving a fully stocked gift bag of VW gear from Volkswagen. In addition, Shell will also be providing the lucky customer $500 in Shell Gift Cards to fill up with high quality Shell diesel to help enhance his Passat TDI's Clean Diesel trip back home.

Volkswagen's all-new 2012 Passat TDI SEL model is the only clean diesel vehicle which promises an estimated 43 miles per gallon on the highway with the manual transmission, and a range of almost 800 miles. It has best-in-class rear seat legroom and the new Fender® Premium Audio System. Lastly, the all-new Passat has earned the Insurance Institute for Highway Safety's (IIHS) TOP SAFETY PICK rating for 2011, the highest possible rating from the non-profit safety research organization.

Toyota vs Tesla: Which Stock To Buy These Days
For Some Former Daimler Managers Daimler Is Authority, While Tesla Is Like a Startup
END_OF_DOCUMENT_TOKEN_TO_BE_REPLACED