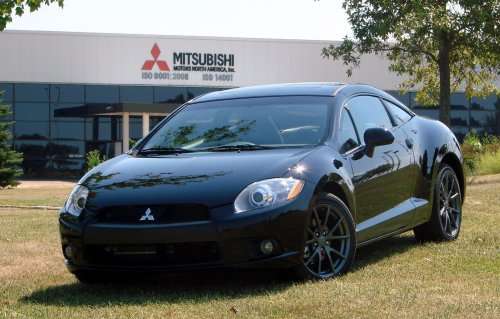 Mitsubishi Motors North America will be selling an all-new 2012 Eclipse Coupe SE to the highest bidder at the Mecum Auctions annual St. Charles Auction. All proceeds raised from the sale of this vehicle will be donated to the Japan Red Cross earthquake and tsunami relief fund.
Advertisement

This very special 2012 Mitsubishi Eclipse Coupe SE is one of a kind and the very last production of the Eclipse model. It came off the assembly line at the company's manufacturing plant in Normal, Illinois. The vehicle is specially customized by Mitsubishi Motors with many unique features to make it an exclusive and exceptional last Eclipse.

The car will be auctioned off to the highest bidder at the Mecum Auctions annual St. Charles Auction at the Pheasant Run Resort in St. Charles, Illinois. The event will be held from September 15, 2011 to September 18, 2011. Mitsubishi Eclipse enthusiasts can see the 2012 Eclipse Coupe SE go on the Mecum Auctions block in Lot S110 at 1:55 p.m. on Saturday, September 17. In addition, viewers that cannot attend the event, will be able to view the sale live on Mecum's national television program "Mecum Auction Live: Muscle Cars & More" on Discovery Communications' HD Theater channel.

The Mecum Auctions annual St. Charles Auction will be featuring muscle cars and Corvettes and is open to all car collectors. There is said to be 1,000 vehicles at the auction. The address is the Pheasant Run Resort located at 4051 East Main Street, St. Charles, IL 60174. All buyers, sllers and spectators are welcome to attend Mecum's St Charles Auction. General Admission is available at the gate for $15.00 per person, per day. Children 12 and younger are free.

In remembering that proceeds are going to the Japan Red Cross earthquake and tsunami relief fund, Mecum and Mitsubishi hopes to receive a great turn out for the all-new Mitsubishi 2012 Eclipse Coupe SE auction. It will be a nice farewell to the classic Eclipse that has been around and loved for so many years.

The Mitsubishi Eclipse, which has been the best-selling Japanese sports car of the last 20 years comes available in either coupe or stylish Spyder soft-top convertible. This fourth-generation model, Mitsubishi has sold just under 1 million units since its debut in 1989. Mitsubishi Motors North America, Inc., is responsible for all manufacturing, finance, sales, marketing, research and development operations for Mitsubishi Motors in the United States. It sells coupes, convertibles, sedans and sport utility vehicles through a network of approximately 400 dealers.

A press release announced that, “In November of 2011, Mitsubishi Motors North America will launch the battery-powered electric vehicle Mitsubishi i as part of a corporate mission to offer consumers more environmentally responsible modes of transportation. This battery-powered electric vehicle technology addresses the need for vehicles that produce zero tailpipe emissions and support a growing agenda for sustainability.”