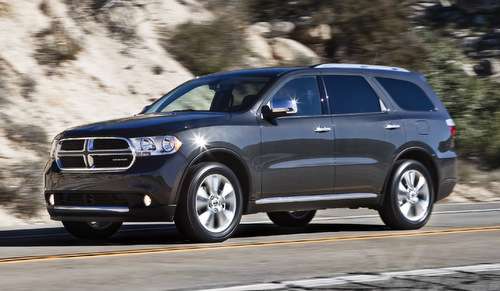 Chrysler starting to build better cars according to Consumer Reports

Chrysler's redesign of the Dodge Durango SUV and Charger sedan earn "most improved" awards from Consumer Reports, but other updated models are still not up to snuff.
Advertisement

The Chrysler Town and Country minivan also earned a "very good" rating and showed significant improvement as well. But vehicles like the Jeep Compass and Patriot, Dodge Journey, and Chrysler 200, star of the hit Super Bowl commercial with rapper Eminem, did not win over Consumer Reports auto testers. "Despite some improvements, they're still mediocre vehicles overall, scoring at or near the bottom of their respective categories," Consumer Reports said in a statement.

Chrysler vehicles scored well in interior accommodations, control setup, and acceleration, but fell short in areas like fuel economy, ride quality, braking distances, and handling agility. Consumer Reports is an independent, not-for-profit publication that accepts no advertising, which it maintains keeps it free from biased opinions.

The Dodge Avenger only received minor updates for 2011, and its mechanical twin, the Chrysler 200, is essentially a renamed and refreshed Sebring. Consumer Reports senior director of auto testing David Champion said "When Chrysler invests the time and money in a true redesign, the result has been a much more competitive model." He's referring to the Dodge Durango and Charger, which are completely redesigned new-generation vehicles for 2011.

The updated Chrysler 300, Dodge Challenger, and Fiat 500 are next to be tested by Consumer Reports. But they have tested eight of the 16 vehicle Chrysler has significantly changed since it emerged out of bankruptcy in 2009 into the control of Fiat, and none of those models have appeared on Consumer Reports' Recommended list. The Ram truck is the only Chrysler vehicle currently on that list.

Since reliability is a factor in Consumer Reports' final assessment of a vehicle, there is not enough data for the new Durango, Charger, and Town and Country to be placed on the Recommended list, as they are too new. But Consumer Reports conducts an annual auto survey of its 7 million readers, and most Chrysler models received below-average reliability scores according to those surveys.

"It's clear that Chrysler is on the right path, but they still have a long way to go," said Champion.