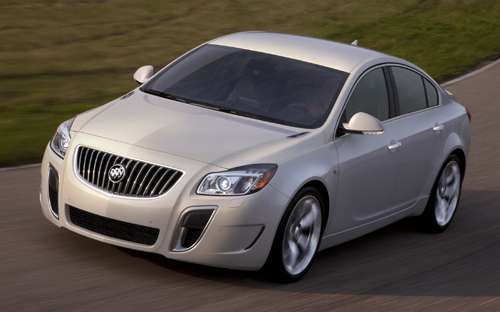 Buick Regal GS to have 270 horsepower

The Buick Regal GS, the highest-performance version of the luxury brand's smallest sedan, will have 270hp and 295ft-lbs of torque from a 2.0L turbocharged Ecotec 4cyl engine.
Advertisement

The 2012 Buick Regal GS will have 270hp and 295ft-lbs of torque when it arrives in dealerships this fall.

The Buick Regal GS will get all that horsepower and torque from a 2.0L turbocharged 4cyl Ecotec engine, and can be mated initially to a six-speed manual gearbox, while a six-speed automatic gearbox will be available later.

"The Regal GS 2.0L turbo delivers the highest specific output of any production engine GM has ever offered, and at 135hp per liter is the most power dense engine ever certified by SAE," said Mike Anderson, Ecotec global chief engineer and program manager.

Direct injection, continuously variable valve timing, and a twin-scroll turbo are some of the methods the little Ecotec engine uses to make such a big horsepower number. It also has a very flat torque curve, making 95% of its torque peak from 2300 to 4900 rpm. Yet, a five-year/100,000-mile powertrain warranty will be standard.

A four-wheel independent suspension with a four-link rear setup will have a lower ride height than other Regals, and will be adjustable through the Interactive Drive Control System, offering three different settings: Standard for all-around daily use, Sport for increased suspension tightness and steering response, and GS for full-fledged performance driving.

19" polished alloy wheels with what GM calls a 5-Twin Spoke design are standard, while 20" wheels of the same design will be optional. Sitting behind them will be Brembo four-piston front calipers, and StabiliTrak electronic stability control and traction control will be standard.

Pricing for the Buick Regal GS has yet to be announced, although it's expected to be in the mid-$30,000 range.

Salvage Cars wrote on June 16, 2011 - 11:24am Permalink
The Regal is a really good step in the right direction for Buick. The GS COULD be a hot car, but I think it missed the mark w/ the engine drivetrain combination. What are your views on the same ? <a href="http://www.autobidmaster.com/carfinder-online-auto-auctions/">Salvage Cars</a>