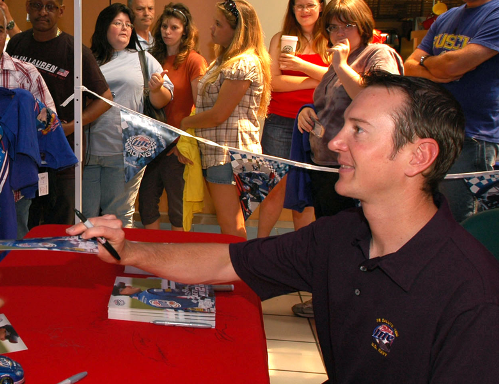 Penske Racing now must hire a new driver for its Shell / Pennzoil No. 22 Dodge Charger Sprint Cup Series car. Busch will seek to drive with another NASCAR team. Neither the team nor Busch made mention of his hot temper and erratic behavior in recent months in announcing the separation.

"I appreciate the victories that Kurt has brought Penske Racing and our sponsors over the past six years," Penske said.

"While I am disappointed that Kurt will not be racing for our team in the future, both Kurt and I felt that separating at this time was best for all parties, including our team and sponsors. I wish Kurt the best in his future racing endeavors."

Busch, who has 24 checkered flags and 169 top-10 finishes in his NASCAR career, left Penske Racing with two wins and 16 top 10s this season, finishing 11th in the points standings.

"I am grateful to Penske Racing for six very productive years," Busch said in the statement.

"Together we won a lot of races. ... Leaving a great organization and a lucrative contract is not easy, but it's an important step for me and allows me to take a deep breath to work on things that can make me a better driver and a better person. I want to personally thank Roger Penske for the opportunity that he has given me."

An Associated Press report provides a deeper look at the rift. The wire service reports Busch was fined $50,000 by NASCAR last week for berating an ESPN reporter in Miami at the Homestead race. The outburst to ESPN's Dr. Jerry Punch was caught on tape by a fan who posted it on YouTube. Busch also has been captured on video flipping someone off. Busch told the AP service he is getting counseling to deal with "personal issues."

"I need to be a better person," Busch said. "It's personal issues ... there's obviously bigger things that I need to accomplish and things can't happen overnight."

Penske has not been mute on Busch's erratic behavior. Last week, Penske Racing issued this statement after the Punch incident went viral: "These actions do not represent Penske Racing and are inconsistent with the company's standards for behavior, respect for others and professionalism."

The car's sponsors also criticized Busch conduct, saying it has been incongruent with their standards and expectations. "Shell and Pennzoil are disappointed with recent actions by driver Kurt Busch at the final race of the 2011 NASCAR Sprint Cup Series race season. His actions are in no way consistent with the way we want our brands represented and we have expressed our disappointment and concerns directly to Penske Racing."

Penske Racing has been the New York Yankees of motorsports. Penske has 350 major race wins, 412 pole positions and 23 national championships to its credit.

Several sources are saying Busch's replacement will be chosen fast. Wikipedia is betting it will be David Ragan. It updated Ragan's page today to say he will be driving the 22 Dodge in 2012. Here's his bio, as cited by Wikipedia and presented, unedited, by TorqueNews:

David Eagan, (born December 24, 1985), is an American NASCAR Sprint Cup Series race car driver. He has previously driven the #6 Roush Fenway Racing ford, but is driving the #22 Penske Dodge for the 2012 season. He is known to reside in Huntersville, North Carolina.

Ragan was born in Unadilla, Georgia, the son of former racer Ken Ragan, and began his racing career racing in the Bandolero Series at age 12. Four years later, he began competing in the Goody’s Dash Series with Cam Strader. After one year, he moved to the Legends Pro-Division to race for Mark Martin. He concluded the season by finishing fourth in the point standings. At age 18, Ragan began racing in the Camping World Truck Series, Nationwide Series, and the ARCA Racing Series.

In 2007, he moved the Sprint Cup Series, driving for Roush Fenway Racing. Between 2007 and 2011, he has recorded 22 top-tens in the series.
On July 2, 2011, David Ragan won his first career NASCAR Sprint Cup series race, the Coke Zero 400 at Daytona International Speedway.