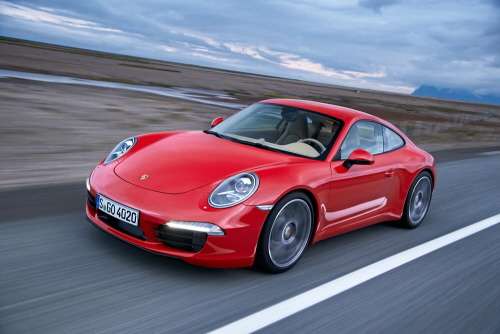 The new Porsche 911 Carrera, the seventh generation of the venerable luxury sports car, has actually been around for almost 50 years. It is redesigned for 2012.
Advertisement

The 2012s will make their world debut at the Frankfurt show in Germany September and will arrive at U.S. dealerships in February.

Its body is sleek and stretched, with exciting contours and precisely designed features. It remains true to the 911 Carrera "evolution, not revolution" mantra at Porsche.

Porsche describes the improvements this way: When viewed from the front, the eye is drawn to the 911’s trademark wide-arched fenders, emphasizing the wider front track. The side mirrors are now mounted on the upper edge of the door, which also helps highlight the new design line and gives the visual impression of width.

The new lightweight body is an aluminum-steel composite construction and contributes greatly to the weight reduction of 100 pounds when compared with the previous 911 body. When combined with the greater structural rigidity and optimized aerodynamics – including a wider, variably extending rear spoiler – the new 911 Carrera’s front and rear lift has been reduced to near zero while retaining the coefficient of drag value of 0.29.

To complement the modern exterior design, Porsche designers created an interior reminiscent of the Carrera GT. The driver is now even more closely integrated within the cockpit thanks to the rising center console and high-mounted shift lever or gear selector located close to the steering wheel. As with the exterior, classic Porsche elements abound inside. Present is the instrument cluster with five round gauges – one of them a high resolution multifunction screen, and of course the central tachometer and the ignition lock to the left of the steering wheel.

In addition to the longer wheelbase, the greater agility, precision and driving stability are based, among other things, on the wider front track, the new rear axle and new electro-mechanical power steering.

You can reach TN's Hawke Fracassa at [email protected] and on Twitter @HawkeFracassa.