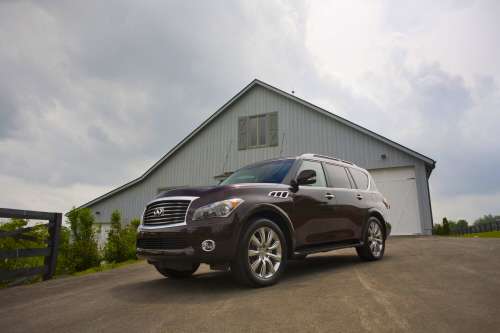 Infiniti, the luxury car division of Japanese carmaker Nissan, has introduced the high-end brand to a new market: Mexico.
Advertisement

The intro was this week in Mexico City when more than 350 guests came together to celebrate. In an atmosphere combining art, gastronomy and the finest wines, five new vehicles that will be sold at "Infiniti Centers" were introduced.

José Muñoz, president and general director of Infiniti, greeted guests with inspiring words and explained why the brand has arrived to Mexico. Infiniti's message: "All or Nothing."

Socialites, celebrities and important business people came to see the cars at the introduction, capped off with a performance by Magos Herrera, a leading jazz voice on the Mexican contemporary scene.

Inspired by key attributes of the Infiniti brand — Inspired Performance, Brave, Human Touch — Mexican architect Michel Rojkind created five exclusive structures to display each of the Infiniti models. Various master craftsmen — using the most advanced techniques — worked for days to bring each of the structures to life. They are to be exhibited to support philanthropic endeavors. Sebastian Vettel, the youngest double world champion in the history of Formula 1 racing, also was part of the launch.

Infiniti also unveiled its Essence Concept Vehicle — the brand’s muse. Infiniti says the concept "functions as an inspiration for the creation and design of the entire Infiniti portfolio."

There will be five Infiniti Centers serving the key markets in Mexico: Polanco, Interlomas, Pedregal, Monterrey and Guadalajara.

Mexico is the 37th country where Infiniti automobiles are sold.

Tesla-Funded Research Reveals One of The Biggest Mysteries of EV Battery
Tesla Tesla Buyer Nets a Whopping $12,000 Discount After Asking for Reduction
END_OF_DOCUMENT_TOKEN_TO_BE_REPLACED