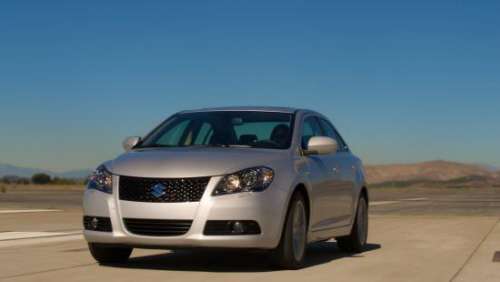 Consumers are using their money to acknowledge value when it comes to Suzuki automobiles. American Suzuki has won five awards for the quality of its cars and trucks in 2011, and those pats on the back for a job well done are translating into steadily growing sales.
Advertisement

The Japanese carmaker's stellar lineup is on a rampage, led by the flagship Kizashi. The sporty sedan has quietly collected three of Suzuki's five industry awards for 2011. Other prize-winners are the Equator compact truck and all-wheel drive SX4 crossover.

The Equator, equipped with 4- and 6-cylinder engines that deliver between 152 and 264 horsepower, won U.S. News & World Report's “Best Compact Truck for the Money.” Year-to-date U.S. sales have been rockin', up an impressive 55%, and May to June sales keep the party going (+74%).

Suzuki's SX4, for the fifth straight year, nabbed the NEMPA Yankee Value Award. In 2010, it was a Kelley Blue Book "Coolest New Car." It's high praise for the 5-door, 2.0-liter 4-cylinder engine-powered SX4. Sales in 2011 are only 3% higher than at this time last year, but that doesn't make the car any less cool. The SX4 in reality is the company darkhorse, making a bold run with a 33% sales boost in June over the previous 30-day cycle.

Whatever the comparison, the star for Suzuki as the 2011 model year winds down has been and continues to be the value-driven Kizashi (pictured). Its 55% sales jump in 2011 vs. 2010 has buoyed an overall 12% increase for the brand with American buyers.

The Kizashi's three key product accomplishments this model year have been impressive. Buyers and critics say with these awards that the Kizashi is a solid option that fun while at the same time being satisfying to drive:

The AutoPacific accolade, especially, “is (a) great accomplishment,” said Steve Younan, American Suzuki's director of product planning and marketing. “This recognition from our owners remains a strong testament to the hard work that our engineers and designers have put into this vehicle.”

Other high points: Edmunds.com named the Kizashi “one of the best midsize sedans on the market …” and Automobile magazine evaluated the car this way: “With its nimble chassis and capable all-wheel drive system, the Suzuki Kizashi is a great alternative for the active-lifestyle folks that Subaru targets.”

The Kizashi is powered by a 4-cylinder 2.4-liter engine that generates 185 horsepower. AutoPacific’s Vehicle Satisfaction Award is the result of surveys with 68,000 new vehicle owners.

RC wrote on July 21, 2011 - 6:52pm Permalink
I love my Kizashi. It's a blast to drive and loaded with great features, they thought of everything.
Anonymous wrote on September 10, 2011 - 1:03am Permalink
The way of the samurai! That is how the Japanese design their cars this car would probably the simplest yet cost efficient car that ever rolls out of the factory. It has some fuel efficient <a href="http://www.autopartswarehouse.com/suzuki~rep.html">Suzuki Parts</a> that uses less fuel compared to other brands like Toyota and Honda.