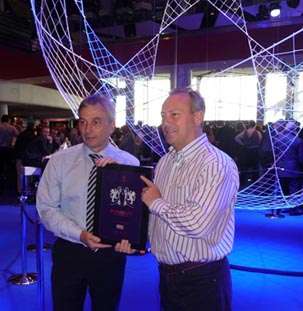 “Our new three-year agreement shows how strongly we feel about this partnership,” Stephen Odell, chairman and CEO, Ford of Europe, said in a statement from Cologne, Germany.

“For a global company like ours, the UEFA Champions League is an ideal platform to connect with millions of people around common values. It is about the best-of-the-best on the ultimate stage, and that's why Ford wants to be part of it.”

David Taylor, CEO of UEFA Events, said the league and Ford Motor Co. both benefit from their association.

“We are delighted that Ford has chosen to extend their agreement with UEFA and the UEFA Champions League for another three years,” he said. “Ford has been a valuable partner of ours since the inception of the competition back in 1992. This renewal in our partnership further strengthens the close relationship we have.

“The UEFA Champions League continues to go from strength to strength and we are confident that it will carry on providing Ford with excellent opportunities to connect and engage with fans on a global basis.”

The league is one of the most popular global sports competitions. More than 1 billion TV viewers tuned in last season, with a cumulative audience of more than 4 billion. More than half of those viewers were outside of Europe.

“This may be a European competition, but like Ford’s latest global vehicles, it is shared and enjoyed throughout the world. Great football, like a great car, is universal in its appeal and this partnership generates world-wide exposure,” Roelant de Waard, vice president of marketing, sales and service for Ford of Europe, told reporters.

“This is the reason why the UEFA Champions League played such big role in the launch of the new Ford Focus earlier this year.”

The UEFA Champions League was instrumental in revealing the new Ford Focus to a global audience through television break bumpers, stadium perimeter boards and online channels.

Activities around the competition, such as the FocusCam attraction at the UEFA Champions League Festival, allowed visitors to the Ford stand to be captured in a 180 degree "Matrix" style animation using a bank of 40 cameras. Participants could then share their video with friends online using the Focus Wi-Fi hotspot, uploading to the sites like Facebook or YouTube. The 77,630 subsequent views online of these films further demonstrated how Ford and UEFA work together in front of huge audiences to bring new Ford technologies to life, Ford officials said.

Ford Motor’s use of social media sites like Facebook and Twitter to communicate more directly with consumers will be further enhanced by the sponsorship agreement. To celebrate the 2012 UEFA Champions League Final being held in Munich, Ford in Germany will play a major role in the support of this event. This will include the launch of “Champions” special value models, as well as the provision of 200 vehicles featuring the 2012 UEFA Champions League Final livery to support transport logistics at the Final, all of which will be promoted through social media, Ford Motor said in a statement.

Tesla Giga Berlin's New Hurdle: It's Not Only the Gov't, but Now Tesla Itself
Teslas Are Sold Out Until 2023, But The Timing May Reverse
END_OF_DOCUMENT_TOKEN_TO_BE_REPLACED