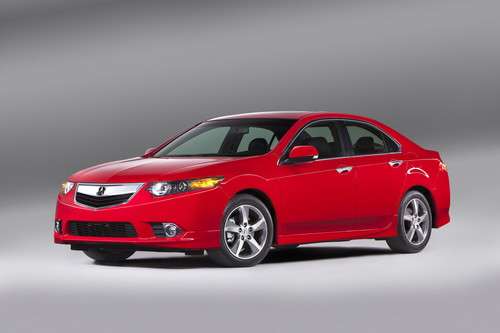 Acura today added a new model and held the line on prices for its entry-level TSX family of cars, with a $200 MSRP increase per auto. Prices range from $29,810 for the bare-bones 2012 Acura TSX sports sedan to $34,810 for the tech-driven 2012 TSX Sport Wagon with Technology Package. Both 2012 cars are available now in showrooms.
Advertisement

There also is a new TSX Special Edition for 2012 with a starting price of $30,810. The Special Edition (pictured) is the sportiest of the three types of cars and adds interior and exterior enhancements. It will make its debut Sept. 22 at an auto show in Orange County, Calif., and will be in showrooms by Oct. 1.

"With a sub-$30,000 starting point, the Acura TSX represents a great value for customers entering the luxury market," said Jeff Conrad, vice president of Acura sales. "Recently named US News and World Report's Best Upscale Small Car for Families, the TSX is great for families and with a sporty new Special Edition, it now has even more appeal for youthful, performance-minded buyers."

The new car, the 2012 TSX Special Edition, is different from the other cars on the outside because it has a sportier spoiler, bumper fascia and side sills, 17x7.5-inch, 5-spoke aluminum wheels with a dark grey finish and a "Special Edition" badge on the trunklid.

The Acura TSX Special Edition's interior is unique in that it has perforated black Lux Suede inserts and red backing. Red stitching and red lighting are used throughout the interior. Aluminum pedal covers add what Acura calls "a race-inspired look." The headliner is black instead of the grey that is used on other TSX models. The 2012 TSX Special Edition comes with two transmission choices: with a "close-ratio 6-speed manual or Sequential SportShift 5-speed automatic transmission."

The Technology Package offered on some TSX cars adds an ELS audio system and hard drive-based navigation system. It costs $3,100.

New on the TSX Sport Wagon this year is a tire repair kit. This creates a larger underfloor storage area on the car than ever before. The TSX Sport Wagon starts at $31,160. The Technology Package for this car is $3,650 and includes a power rear tailgate. Destination charges for all TSX models stays the same as 2011, at $885.