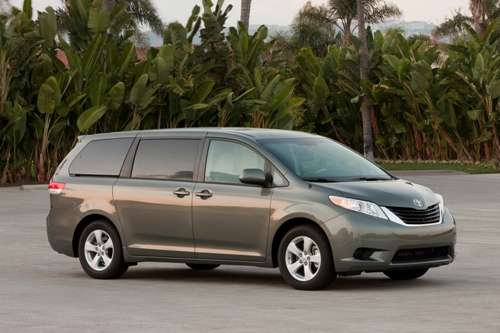 The 2012 Toyota Sienna that's assembled by American auto workers in Princeton, Ind., will be sold in showrooms in South Korea, beginning this month.
Advertisement

This is the first time Toyota's leading-edge minivan will be exported outside of North America. Shipments of the 2012 Toyota Sienna (pictured) are in the works right now. About 600 units per year will be exported from Indiana to South Korea.

“Toyota’s North American operations are constantly working to identify and expand new export opportunities for the vehicles we produce here, building on our extensive investments in auto production, research and development in the U.S. and helping to maintain a strong, stable base of jobs,” said Yoshimi Inaba, president and COO of Toyota Motor North America Inc.

“With this development and other possible achievements in the future, we hope to continue boosting exports from our North American operations.”

Toyota exports to 19 countries by adding South Korea to the mix. Toyota began exporting American-made vehicles in 1988 and currently ships about 100,000 units to other countries from U.S. soil.

Toyota also exports the Avalon sedan, which is made in Georgetown, Ky.; the Sequoia SUV, from Princeton; and the Tacoma and Tundra pickups, which are assembled in San Antonio.

The Sienna, redesigned in 2011, offers comfort, versatility, style and fuel efficiency. It is the only van in the segment to offer an all-wheel-drive option. For the 2012 model year the XLE grade adds a standard power passenger seat and auto on / off headlights.

Prices for the third-generation Sienna start at $25,060 and exceed $40,000 for well-equipped models.

The Toyota Sienna offers an engine choice of between 4 and 6 cylinders: A 3.5-liter V6 or 2.7-liter 4-cylinder engine. Both engines on the family van offer the latest in efficient, lightweight technology, including Dual Variable Valve Timing with intelligence, roller rocker arms and an Acoustically Controlled Induction System that changes the intake tract length to optimize torque.

The 2.7-liter 4-cylinder engine produces responsive power (187 horsepower at 5800 rpm) and delivers fuel-efficiency ratings of 19 mpg city and 24 mpg on the highway. Both engines are matched with the Sienna’s electronically controlled 6-speed transmission with sequential shift. That provides a smooth gear-shift feeling, quiet performance and a lightweight size.

Hawke Fracassa covers the auto beat from Detroit for TN. You can reach him at [email protected] or (248) 747-1550. Follow him on Twitter @HawkeFracassa.