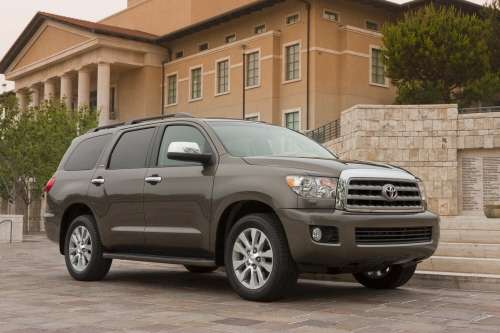 2012 Toyota Sequoia has power in tow

The 2012 Toyota Sequoia SR5 is a brute. But if it's your brute, you're going to love it. It's a full-size sport-utility vehicle with muscle, powered by a 310 horsepower 4.6-liter i-Force V8 engine that pushes the truck to tow a whopping 7,400 pounds.
Advertisement

There's also a 381-horsepower 5.7-liter 8-cylinder engine that is an option on the SR5 and standard on the better-equipped Limited and Platinum models, as if this bad boy wasn't enough to make your spine tingle.

The name of the game right now in the car business is "safety first," and the 2012 Toyota Sequoia (pictured), which starts at around $41,000, adds that with the addition of Trailer Sway Control. And a new Blind Spot Monitor available on the Sequoia Platinum grade warns drivers of cars and trucks that pace drivers in their blind spots.

The 2012 Toyota Sequoia, which is assembled in the Midwest in Princeton, Ind., is available in SR5, Limited and Platinum models with a choice of 2WD and 4WD. Some Sequoia 4x4 5.7-liter models offer E85 Flex Fuel capability.

The engine is mated to a 6-speed electronically controlled automatic transmission.

Critical to customers who tow, the 5.7-liter V8 produces 90% of its peak torque at 2200 rpm. A Tow / Haul mode modifies transmission shift points for optimal performance. The new-for-2012 Trailer Sway Control system, which is also featured on the Toyota Tundra, a full-size pickup truck assembled in Texas, uses Vehicle Stability Control to limit trailer sway. The Sequoia's towing hitch is integrated into the frame as one unit.

A 38-foot turning circle is one of the tightest in the Sequoia's class.

The 2012 Toyota Sequoia has standard equipment that includes Vehicle Stability Control, ABS with Electronic Brake-force Distribution and Brake Assist and traction control. It has a dual stage advanced front air bag system, seat-mounted side airbags for the driver and front passenger, roll-sensing side-curtain airbags for all three seating rows, and driver and front-passenger knee airbags.

Standard audio on the SR5 is an AM / FM / mp3 / CD with eight speakers, integrated SiriusXM and an auxiliary audio jack / USB port.

The Limited also has as standard a 10-way adjustable power driver’s seat, a leather-trimmed steering wheel and gear-shift knob, Optitron gauges and a multi-information display. A standard-equipped auto-dimming electrochromic rear-view mirror integrates a compass and a map lamp, plus a 3.3-inch monitor in the rear-view mirror for the backup camera, when not equipped with a navigation system. There also is a JBL Synthesis AM / FM 6-disc CD changer system with 14 speakers, SiriusXM, Bluetooth and an auxiliary audio jack / USB port.

The only option on SR5s grades is a Sport Appearance Package. The package includes 7-passenger seating, 20-inch super chrome alloy wheels, a color-keyed grille and black seat fabric. Exterior colors for the Sport package are black, white and silver.

The Limited's options are a Rear Seat Entertainment System that includes a DVD player with rear audio controls and 115V outlet, a DVD navigation system with a backup camera and JBL Synthesis AM / FM 4-disc CD changer audio system with a subscription to SiriusXM and NavTraffic. Optional captain’s chairs can replace the standard second-row bench seat.

The lone option on the Platinum is a White Pearl exterior.

Headlamp washers are standard on all grades for improved visibility. On the Limited grade, the large side-view mirrors feature power retraction, automatic glare-resistance, and turn-signal lamps. In addition to these features, the Platinum grade mirrors also include puddle lamps, position memory and reverse-linked tilt functions.