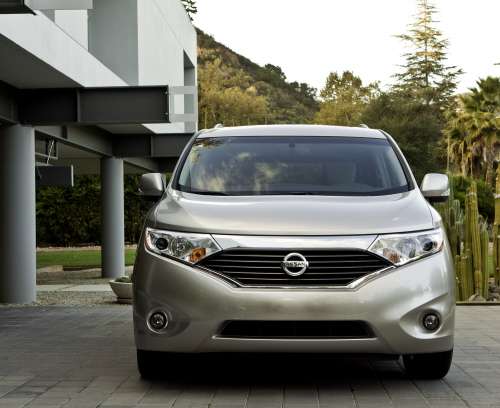 The 2012 Nissan Quest comes in four grades this model year, with prices starting at $27,750 for the base S model, the Japanese carmaker announced on Tuesday.
Advertisement

The Quest has been part of the Nissan lineup in the United States since 1993.

In its first two generations, the Quest was assembled in Avon Lake, Ohio, and was the cousin of the Mercury Villager, which is no longer in production.

The third-generation Quest, which began with a 2004 redesign, shared a platform and engines with the Nissan Altima, Maxima and Murano. It was manufactured in Canton, Miss.

Production shifted to Japan in 2011, when the Quest began its fourth generation as a Nissan minivan. Today the Quest continues to share a platform with the Nissan Elgrand.

XM Satellite Radio is standard on SV and SL Quests.

The 2012 Nissan Quest comes with standard Nissan Intelligent Key and optional sliding doors that unlock and open the side door with a button touch. The Quest’s second row has a walk-in device for easier access to the back row. A liftgate is standard on SL and LE grades.

The third row of seats folds forward. The permanent rear storage well is always available, and a flat cargo floor is there without having to remove any seats.

Fuel economy is 19 mpg city, 24 mpg highway. The 2012 Quest also has 4-wheel independent suspension and disc brakes and vehicle-speed-sensitive power steering. A nice feature is a light that warns the driver that a car is in a blind spot.

Seven exterior colors are available. Super Black is added for 2012. There are two interior colors in a choice of cloth (S and SV) or leather-appointed (SL and LE) seating.

TN reporter Hawke Fracassa reports on the automotive industry from Detroit. Write to him at [email protected] or call (248) 747-1550. Follow him on Twitter @HawkeFracassa.

Keith Griffin wrote on October 19, 2011 - 6:39am Permalink
And let's not forget that the Quest is one of the semi-finalists for North American Truck of the Year.