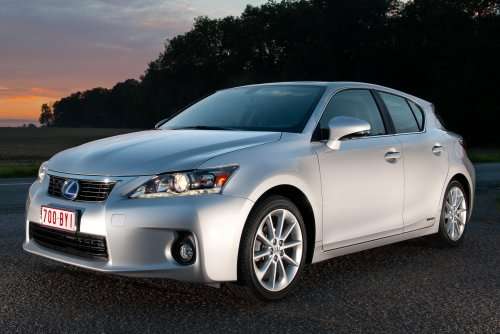 The new Lexus CT 200h hybrid, a showroom baby in that it's only been on the market for two months, has already earned the Top Safety Pick award from the Insurance Institute for Highway Safety.
Advertisement

The designation from the institute, a non-profit research center funded by auto insurance companies, means the car is safe and stable.

To earn the award, the stylish 2011 CT 200h had to have electronic stability control while getting a “good” rating in front, side, rollover and rear impact evaluations.

Lexus credits the sleek and strong body structure of the CT 200h for making the car safe.

The body is "strategically resilient" to help absorb and distribute energy during a crash, a Lexus spokeswoman said. Steel components assure strength in important areas.

The CT 200h is equipped with an eight-airbag Supplemental Restraint System with dual-stage front airbags and knee airbags for driver and front passenger, side curtain airbags and front side airbags to help keep front and rear passengers safe, even during violent front and side collisions.

The front passenger’s twin-chamber airbag spreads forces applied to the passenger side right after deployment, the spokeswoman said.

The CT 200h also has a special seat with a new seat back structure and headrest design that prevents whiplash.

The car is powered by a 134 horsepower engine that generates 43 mpg in city driving, and 40 mph on the highway.

Sam B wrote on June 1, 2011 - 6:23am Permalink
I always wonder if it’s better to have more airbags – looks like they really do more good than harm! I wish I could get lower priced auto insurance for having them. Incidentally, heres another article that talks about air bags. http://www.safeauto.com/blog/post/2011/05/16/Airbag-Safety-vs-Airbag-Injuries-Here-Are-The-Numbers.aspx