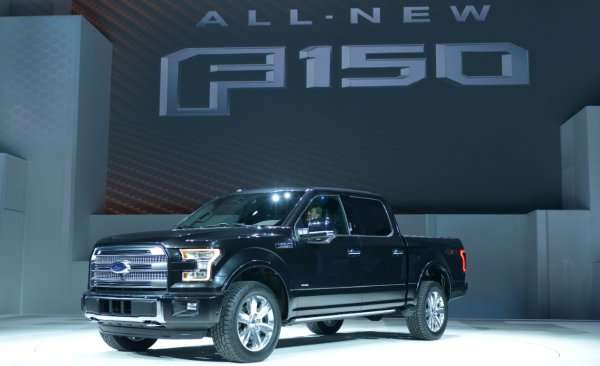 If you have been patiently waiting to purchase a 2015 Ford F150, you should head to your friendly neighborhood Ford dealer today as the order banks for the next generation F150 are officially open – even though the full details and pricing on the 2015 models haven’t been announced yet.
Advertisement

The Ford F150 is one of the bestselling vehicles in America, serving as the top option in the F Series which has led the US market for more than three decades. Any new F150 is a big deal to both Ford and the US industry as a whole, but the 2015 Ford half ton pickup is an even bigger deal due to the heavy use of lightweight aluminum body panels. This could revolutionize the American truck industry…or it could tank and serve as an ugly blemish on the history of the mighty F150. I think that it will be a good thing to have an F150 that is lighter, more capable and more efficient, but some people think that the aluminum usage is a big mistake.

In either case, the 2015 Ford F150 is a very big deal and Ive spoken with a handful of prospective truck buyers who have been putting off making their next big purchase until they have a chance to check out the next gen F150. With the official opening of the order bank, the new 2015 F150 is very close to arriving in dealerships around the country.

More Than Just a Lightweight Body
The 2015 Ford F150 has gotten tons of press since being introduced earlier this year at the Detroit Auto Show and much of that press has focused on the aluminum body. However, the next generation F150 is going to be a big deal for more reasons that just the lightweight construction. In addition to the 3.5L EcoBoost V8 and the 5.0L V8 that also power the current 2014 F150, the 2015 models will benefit from a new 3.5L base model V6 and a new 2.7L EcoBoost V6. This engine lineup should make for the most efficient F150 lineup ever, but it should hit those impressive fuel economy figures while preserving all of the towing and hauling abilities that you would expect from the market’s bestselling pickup.

In addition to the quartet of powerful, efficient engine options, the 2015 Ford F150 will feature a new high tech design on the outside that introduces a little Super Duty flare to the half ton pickup with a big, bold grille and huge headlights. On the inside, the 2015 F150 will have every bit of cutting edge interior technology ranging from the newest MyFord Touch infotainment system with Sync, heated/cooled leather seats that can massage your back, premium sound system options and much, much more.

Full Pricing is Still a Question
The biggest downside to ordering a 2015 Ford F150 right now is that the full pricing details haven’t been offered up thus far. Yesterday, we looked at the base prices across the five early trimlines (click here for more on the pricing), but those initial figures leave a great many question marks for prospective buyers. Your local dealerships will certainly be able to answer questions on option pricing, but those looking to rush out and order a 2015 F150 today can expect to pay every bit of the MSRP as dealerships won’t be offering much wiggle room and there will be no incentives for the first units delivered.

The good news is that for those prospective buyers looking for a deal on a new Ford F150, the 2014 models already on lots around the country should soon be available for more budget friendly prices. Once the first 2015 models arrive, we can expect to see deep discounts on 2014 models as dealerships look to make as much room as possible for the next generation F150.