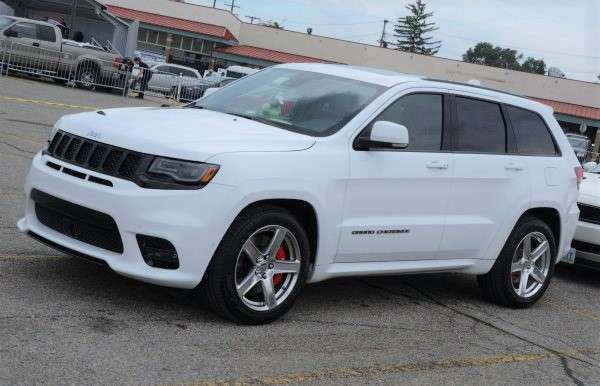 What's the Word on the Hellcat-Powered Jeep Grand Cherokee?

A year ago or so, the internet was ripe with speculation on the Hellcat Hemi-powered Jeep Grand Cherokee which is expected to be named the Trackhawk, but over the past few months, news on the supercharged Jeep has seemingly dried up – so today we revisit the Hellcat Jeep and discuss where it might debut.
Advertisement

Back at the 2016 North American International Auto Show, Jeep boss Mike Manley stated that there would be a Hellcat powered Jeep Grand Cherokee on sale by the end of 2017. Provided that it arrived towards the end of the 2017 calendar year, it would likely be a 2018 model year vehicle and with that in mind, there was reasonable speculation last year that the 2017 New York Auto Show would play host to the debut of the Hellcat Jeep. There were even some unsubstantiated “insider reports” which insisted that the Trackhawk would debut at either the Detroit Auto Show or the New York Auto Show.

However, since late in 2016, information on the Jeep Grand Cherokee Trackhawk has dried up, including the flow of proven information from trusted insiders. Many of the alleged spy shots stopped being discussed when we learned that the Jeep above in white is actually the new SRT 392 Jeep. Of course, the focus of the Hellcat community has shifted to the new version of the supercharged Challenger coming later this year, but many people are still clamoring for a 707 horsepower Jeep.

The key issue now is that with Dodge planning to launch their next high performance muscle car in New York, it seems highly unlikely that the FCA brands would essentially compete with each other for headline time, so it would be a shock to see the Hellcat Jeep debut in the Big Apple alongside the newest Hellcat Challenger.

If Not New York, Where?
Provided that the Trackhawk Jeep does not debut in New York City in April, it leaves all of us wondering when and where FCA might roil out the Hellcat powered SUV. New York is the last major auto show until Los Angeles in November, so perhaps Jeep will hold off on introducing the Hellcat Grand Cherokee package for LA. Manley did say that it would debut by the end of 2017, and while November would be an extremely late introduction for a 2018 model year vehicle – LA seems like the most likely location for a Hellcat Jeep debut if it doesn’t arrive in New York.

There is also the possibility that FCA will not introduce the Hellcat powered Jeep Grand Cherokee Trackhawk at a major auto show – instead rolling it out at an event with more folks who can appreciate a 600+ horsepower SUV. For example, FCA introduced the Hellcat Charger to the public at the Woodward Dream Cruise after introducing it to the media a few days earlier. The company could use the horsepower-hungry Woodward crowd to introduce the world’s quickest, fastest and most powerful SUV, and while it might not get as much foot traffic as a major auto show – the Dream Cruise crowd is far more likely to appreciate the Trackhawk then your average auto show crowd.

Rumored 0-60
Although information on the Hellcat Jeep has become sparse, there is a rumor floating around the internet that the Grand Cherokee Trackhawk will dash from a stop to 60 miles per hour in the low 3-second range. There have also been rumors that the Hellcat Hemi in the Jeep will be detuned a bit from the output of the Hellcat Dodge cars in order to preserve the AWD bits, but even with something north of 600 horsepower – coupling that supercharged Hemi power with an advanced all-wheel drive system could most certainly lead to a big SUV that will get to 60 more quickly than almost any sports car sold in America.

Unfortunately, with a NY debut looking less likely, it could be 4-6 months before we get a look at the Hellcat Jeep, but when it arrives – it will almost certainly be an incredible machine.