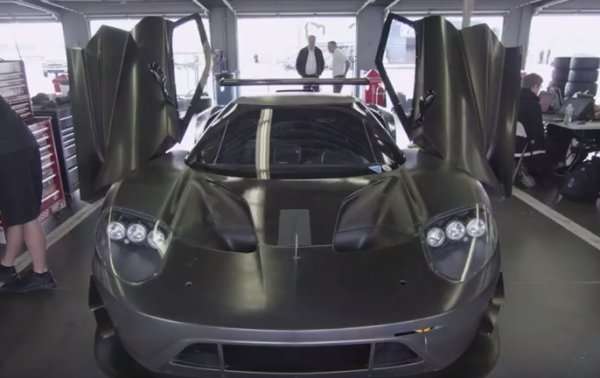 Watch, Listen and Fall in Love with the Ford GT Race Car

The Ford GT will make its on-track debut at the upcoming Roar Before the Rolex 24 event at Daytona International Speedway, but the Motor Company has already offered up a short video of the new GT race car in action and if you liked it sitting still – you will love it in action.
Advertisement

Ford is finally getting back into the supercar race in 2017 with the new Ford GT, but the new GT race car will make its debut in just 4 days at the Roar Before the Rolex 24 – which is a warm-up event for the 24 hour endurance race later this month. While the EcoBoost engine under the rear hatch was first introduced last year in Riley prototype racecars, the arrival of the new GT race car with the monster EcoBoost V6 marks the first time in many moons where Ford fans had a reason to watch production-based endurance racing.

Best of all, after the huge success of the EcoBoost prototype racecars last year, the new Ford GT racecars have something to go on when preparing for the races early on in the 2016 schedule. It might be the first race for these cars, but many of the moving parts have been used in some form in the Riley EcoBoost prototype racers in 2015 and that should be a huge benefit to the GT teams.

To make sure that we are extra excited for the introduction of the Ford GT race car, the Motor Company has offered up the short video below. This video gives us the best chance yet to hear the high performance EcoBoost race motor in action and in many situations. The GT looks awesome and the GT race car sounds like a proper twin turbo V6 racer.

Ford GT Meets the Competition
Although Ford has experience with the EcoBoost V6 race engine in the prototype class, the new GT race teams will meet some very stiff competition in the GT LeMans class. Most notably, the new Ford will have to tackle the Corvette Racing program, which has been one of the most successful programs in the segment over the past decade. Also, any time there are Fords and Chevys racing on the same track, there is going to be a natural rivalry. Too bad that Dodge couldn’t keep their program in the GTLM class as well.

The Ford GT teams will also have to run against the Porsche and BMW teams that beat Corvette Racing in the 2015 championship battle, as well as teams from Ferrari, Porsche and Aston Martin.

We will be sure to bring you coverage from the Roar Before the 24, but in the meantime, crank up your speakers and enjoy this video of the Ford GT race car testing.