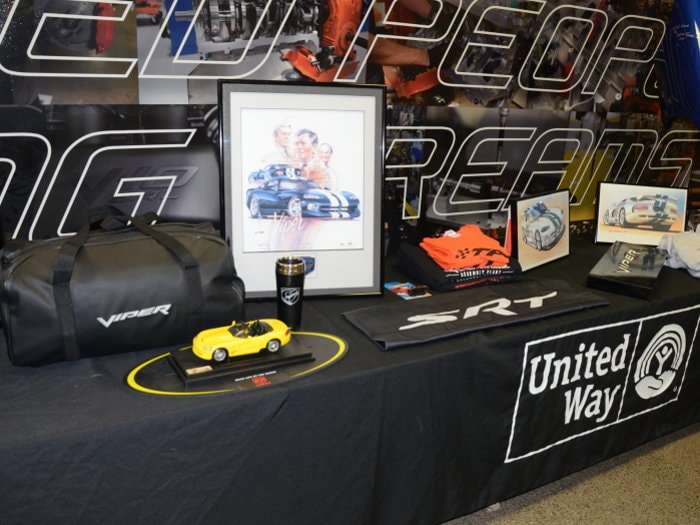 A long list of items from the Conner Ave Assembly Plant where the Dodge Viper was built are being auctioned online right now, with the proceeds going to benefit the United Way – with everything from the sign over the front doors to autographed hoods to items from the gift shop being sold to benefit charity.
Advertisement

When the Conner Ave Plant was still building Dodge Vipers last year, it was more than just your average assembly plant. Near the front entrance was a large gift shop with all sorts of Viper related items and along one wall of the facility was a sort of Viper Hall of Fame, with a collection of the most important Dodge supercars dating back to the early 1990s as well as an assortment of Viper memorabilia such as hoods autographed by the build team. There was also plenty of unique signage around the actual assembly line and at the various production stations throughout the plant, along with massive amounts of artwork lining the walls of the entire facility.

You can view the entire list of items being auctioned for the United Way by clicking here.

Gift Shop Items in the Auction
First up, when the gift shop in the Conner Ave Viper Plant closed, there was plenty of inventory left on the shelves. Much of that is available via the United Way charity auction, but most of these items have fixed prices. This includes Viper posters, shirts, baby onesies, cups, key chains, decals, phone cases and toy cars.

Limited Edition Art
Next, one of the most populous types of items being auctioned off for the United Way is unique artwork featuring the Viper. There are many event posters, vehicles posters, magazine cover posters, racing images, and all sorts of other Viper art that was hung around the facility.

More importantly, while not “art” by the traditional sense, there are eight different Viper hoods on the auction website right now, all of which are signed by everyone involved with the Viper at the time that particular hood was immortalized. Bidding for all of the hoods begins at $5,000.

Factory Signage
Finally and most importantly, many of the signs from the inside and outside of the Conner Ave Viper Assembly Plant will be auctioned off for charity, including the large sign hanging over the front doors to the facility. That piece already has 27 bids and sits at a price of $2,525, but it is sure to go way, way higher with 23 days remaining on the bidding.

For those who don’t win the big sign from the front of the building, many of the smaller signs from the inside of the Viper plant are also on sale. For example, each Viper that came off of the assembly line went through a “roll test” and that area had two large banners. Each of those banners is available right now with a starting bid of $500. The large facility map is also available (Current bidding price is $100) and there are more than a dozen banners that hung around the inside of the plant at one time or another with pricing for those starting at $100.

The odds are good that many of the most interesting pieces will go for big money, but for those hardcore Dodge, Mopar and Viper fans, this is final chance to buy a piece of history while also helping a great charity.