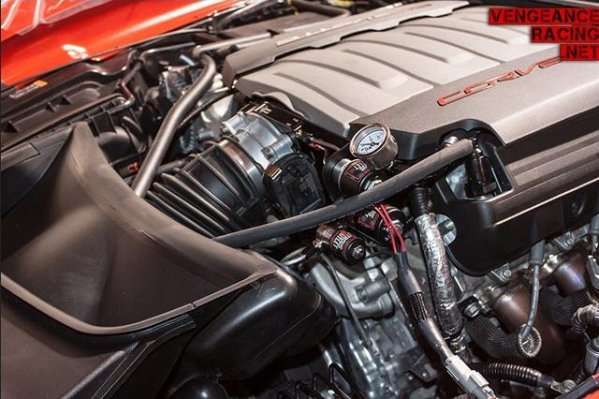 We have already seen a handful of heavily modified 2014 Chevrolet Corvette Stingray Coupes making big power with a head and cam swap but Vengeance Racing announced today that they have tuned the most powerful C7 in the world – and they have done so with the stock cylinder heads.
Advertisement

The information on this 2014 Chevrolet Corvette Stingray comes to us from our friends at StingrayForums.com, where site sponsor Vengeance Racing has built one serious C7 package. The Vengeance Racing 2014 Chevrolet Corvette Stingray made 739 horsepower and 739lb-ft of torque which makes it (currently) the most powerful C7 Corvette in the world. That is a mighty impressive claim with some might impressive numbers but what is even more impressive is the fact that so little has been done to this car to hit those 739/739 figures.

Vengeance first added their own custom camshaft package to their 2014 Chevrolet Corvette Stingray with new valve springs, pushrods, lifters and the rest of the items needed for a proper high performance camshaft swap followed by a Katech timing chain. Next up for this red C7 was a set of American Racing long tube headers and a catted 3” X pipe to help the beast breathe and as a result, Vengeance was able to pull 511 .74 horsepower and 446.21lb-ft of torque from the new LT1 V8. Those are great numbers considering how little was done to the car but when the crew started introducing nitrous oxide to the setup – the numbers went up by incredible levels.

What is just as impressive as the 739/739 figures is the fact that this bottled and cammed 2014 Corvette Stingray has a big RPM range where the LT1 is making those big numbers. Horsepower on the final run appears to have peaked around 5,800rpm but this C7 made over 700 horsepower from 5,000 to 6,100rpm (or so) while the peak torque was made around 5,000rpm with at least 700lb-ft from 4,200 to 5,500rpm. That is a big RPM range for those lofty numbers and that gorgeous powerband should most certainly equate to some serious real world numbers. Unfortunately, the weather is just as miserable in Georgia where Vengeance is located so the crew hasn’t gotten the car to the track but they expect to do so once the weather clears up.

Vengeance mentions in their post on StingrayForums.com that they plan to shoot for 800 rear wheel horsepower but they are currently at the limits of the ECU in terms of tuning capabilities but should an advanced ECU come along for the LT1 – Vengeance will be looking to crack the 800rwhp mark. In the meantime, check out the video of the Vengeance-tuned 2014 Corvette on the dyno and behold the most powerful new Corvette in the world.