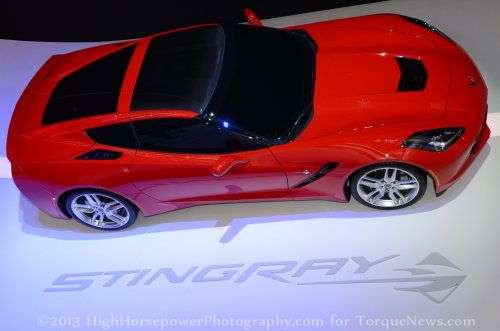 Over the past few weeks we have taken a close look at the new debuts at the 2013 North American International Auto Show in Detroit’s Cobo Hall and with such a big year at hand – the folks here at TorqueNews put our heads together to come up with our favorites from Detroit in a variety of categories.
Advertisement

While literally every company had something new to show off at the 2013 Detroit Auto Show, some companies made far more noise with either concepts, production debuts or both. From new models headed to dealerships soon that will instantly enter the automotive history books to concepts that will likely never come close to production – Detroit 2013 brought us a spread of debuts that warrants one last look with the very best deserving some extra special attention.

For the TorqueNews.com Top Vehicles of the 2013 Detroit Auto Show, we came up with 9 different categories pertaining to specific vehicles at the NAIAS along with a special recognition for the automaker who stole the show in 2013. Those 9 categories are Best Sedan, Best Coupe, Best SUV, Best Convertible, Best Truck, Best Concept Vehicle, Best Production Debut, Best Performance Car and Best Alternative Power Vehicle. For each of those categories, we will look at our top three along with offering a little information on the vehicles that we picked – listing them in dramatic reverse order, of course. Click any of the vehicle titles to see more information and unique imagery of the vehicle in question!

Best Sedan:
Third Place – Lexus IS – This super sporty small sedan made its world debut at Cobo Hall in both the aggressive F Sport package and the IS Hybrid that will not be sold in the US. The entire Lexus brand is undergoing a dramatic shift to more aggressive styling – a feature which is well worn by the new IS.

Second Place – Toyota Corolla Furia Concept – The Toyota Corolla has maintained its position as one of the bestselling passenger cars in the US market even though the Corolla is lacking the more striking styling seen by many of the new competitors in the compact sedan segment. The Furia Concept is a bit too extreme in the form in which is debuted in Detroit but with a few minor tweaks, the Furia shows that the Corolla could be coming with its own aggressive design of its own to compete with the likes of the Ford Fusion, the Hyundai Elantra and the Dodge Dart.

The Best Sedan of Detroit – Hyundai HCD-14 Genesis Concept – The HCD-14 Genesis Concept might have a bunch of gadgetry inside that will combine with the suicide rear doors to compile a long list of features of this sharp sedan concept that wont be offered in a production car any time soon but at the same time – it gives us our first look at the next generation of Hyundai exterior design. The Genesis sedan has a sporty look but should the Korean automaker be able to apply the design of the HCD-14 to a production version of the next generation Genesis sedan – we can expect a big spike in popularity.

Best Coupe
Third Place – Mercedes Benz E Class Coupe – The Mercedes Benz E Class stormed into Detroit with a huge spread of new models with the majority of the attention being focused on the high performance AMG E63 sedan. However, the super aggressive new E Class Coupe will join with the E Class Cabrio in helping the E Class claim a bigger chunk of the segment moving forward.

Second Place – 2014 Cadillac ELR – General Motors needs to make money on the drivetrain of the Chevrolet Volt and the 2014 Cadillac ELR will be the car that helps them company do that right away. The ELR is built on the same chassis as the Chevy Volt but the exclusion of the rear doors and a vastly unique styling of the own makes the ELR one of the most efficient and attractive luxury coupes in the world. The ELR appears frequently throughout our awards – for good reason.

The Best Coupe of Detroit – 2014 Chevrolet Corvette Stingray – There is no question that no vehicle drew more attention leading up to the show or after the start of the show than the 2014 Chevrolet Corvette Stingray. The new C7 Stingray is the striking newest chapter in the 60 year history of the mighty Corvette and while this new Corvette has vastly unique styling from the old models – it debuted in Detroit and became a major part of automotive history all at once. It was a tight race between the Corvette and the Cadillac ELR for best coupe but considering the simple fact that the debut of the seventh generation of the historic American performance car, we had to give the nod to the Vette.

Second Place – Audi SQ5 – We love the Audi Q5 for its compact design, roomy interior and spirited driving characteristics but adding a ton more power, unique exterior appointments and a handling package to make it even more fun to drive allow the Audi SQ5 to emphasize the “sport” in sport utility vehicle.

Best Convertible
Third Place –BMW Z4 - The BMW Z4 is a hardtop convertible that is a total blast to drive. While it wont hit 100 in 9.7 seconds or get anywhere near 200mph in stock form, this is a European luxury sports convertible that you can actually afford.

Second Place – Bentley Continental GT Speed Convertible –616 horsepower, 202 mile per hour top speed, 0-100 in 9.7 seconds and Bentley luxury in convertible form. This car is a very good reason to be envious of the insanely wealthy.

The Best Convertible of Detroit – Mercedes Benz E Class Cabriolet – The new E Class debuted for Mercedes Benz at the 2013 Detroit Auto Show and the topless Cabriolet looked sharp in bright red alongside the new Coupe and the rest of the brand new E Class lineup. With the buyer’s choice of a 3.5L V6 or a 400 horsepower twin turbocharged V8. Add into that the sharp new exterior and you have a fully new Benz convertible that drew more attention than the other two for good reason.

Best Truck
Third Place – 2013 Ram Heavy Duty – The 2013 Ram 3500 can tow a whopping 30,000 pounds, making it the most powerful truck in the consumer market. While it doesn’t present as many segment exclusives as its half ton brother, the fact that the new 2500 and 3500 Ram HD pickups are the strongest in their class is reason enough for these new heavy haulers to deserve a spot on our list.

Second Place – Ford Atlas Concept – The Ford Atlas Concept was easily one of the best looking trucks on display at the 2013 Detroit Auto Show and had it come with a full complement of specifications that you would get with a production models, the Atlas would have been our top truck debut from Detroit. However, regardless of how incredible the Atlas looked at the debut – the fact that it is not a production model locked it into the second spot on the list.

The Best Truck of Detroit – 2013 Ram 1500 – the 2013 Ram 1500 has won pretty much every truck award possible and the most significant came at the 2013 Detroit Auto Show when it was named the North American Truck of the Year. Air suspension, an 8-speed transmission, a sharp exterior design, a variety of cab and bed sizes, a huge variance in trimlines and the powerful yet efficient 5.7L Hemi V8 makes the best truck in attendance of the 2013 NAIAS.

Best Concept Debut
Third Place – Toyota Furia Concept – The Toyota Furia also showed up in the list of our favorite sedans and considering that this sleek metallic orange sedan could offer us a first look at a future global bestseller, the Furia was one of Detroit’s finest concepts.

The Best Concept of Detroit – Ford Atlas – The Ford brand was very quiet during the first day of the 2013 Detroit Auto Show but when they rolled out the gorgeous Ford Atlas Concept Truck in Joe Louis Arena – Ford Motor Company showed that the future is very, very bright for the bestselling Ford F150.

Best Production Debut
Third Place – Lexus IS – The Lexus IS is the volume vehicle of the Toyota luxury brand and the application of the familiar spindle grille looks great on the new IS. While we won’t get the great looking IS Hybrid in the US, the new F Sport package that debuted in Detroit will go a long way in helping Lexus secure a bigger chunk of the market share.

Second Place – Cadillac ELR – The luxury segment is definitely one that is ready to accept a super efficient coupe so the introduction of the Cadillac ELR gives General Motors the most efficient luxury car available in the US or around the world. The ELR looks fantastic inside and out, it should offer around 40 miles of emission free driving and the range extending engine prevents this sleek electric coupe from ever having to be left at home due to range anxiety.

The Best Production Debut of Detroit – 2014 Chevrolet Corvette Stingray – The 2014 Chevrolet Corvette Stingray applies 60 years of sports car experience to an American supercar with a very fresh exterior. This car is a rolling work of art and it will do a fine job of serving as the seventh generation of the oldest sports car in American automotive history. As what is the most powerful yet most efficient “base” Corvette ever, the 2014 Stingray is definitely the most significant production debut from Detroit.

Best Performance Car Debut
Third Place – VL Destino – While the odds are good that many people will never see a VL Destino in person unless it is at an auto show, we are just smitten with this sleek super sedan. Thanks to Bob Lutz and his partners at VL Productions, the world can now purchase a car that looks like the Fisker Karma with the drivetrain of the amazing Corvette ZR1. 638 horsepower and a manual transmission in a car that offers the striking design and luxurious interior of the Fisker Karma is a win-win.

The Best Alternative Power Debut
There were a variety of alternative power vehicles that rolled out for the first time at the 2013 Detroit Auto Show including the Volkswagen CrossBlue, the new Mercedes Benz E Class Hybrid and the newest Acura NSX but none of those vehicles can compete in importance to both the industry or to an automaker like the Cadillac ELR. This sleek luxury coupe combines all of the great qualities of the popular Chevrolet Volt and applies those fuel sipping technologies to a 4 seat, 2 door coupe with high end luxury amenities. The Cadillac ELR enters the market as the most efficient luxury car in the US so for that reason, it is our Best Alternative Power Vehicle Debut of the 2013 Detroit Auto Show. In claiming the title of being the best alt power vehicle, the ELR was the only vehicle to unanimously win a category - every TN writer picked the ELR as their top alternative vehicle.

Finally, our honors for the top automaker of the 2013 North American International Auto Show goes to the folks at General Motors. Between the 2014 Chevrolet Corvette Stingray and the 2014 Cadillac ELR, GM stole the show from the performance angle and in the world of EVs. Add to that the introduction of the new Chevrolet Silverado and GMC Sierra pickups and it is hard to argue that any automaker made a bigger splash in Detroit than General Motors.

Clea wrote on May 24, 2014 - 2:42am Permalink
It doesn't look like Cadillac has strayed far away from the coencpt vehicle. I like the choice of the camouflage as it actually accentuates the angularity of the vehicle. Cadillac would have been served producing this model a few years back, but better now than later. I wonder whether this model will spell the end of the CTS Coupe?