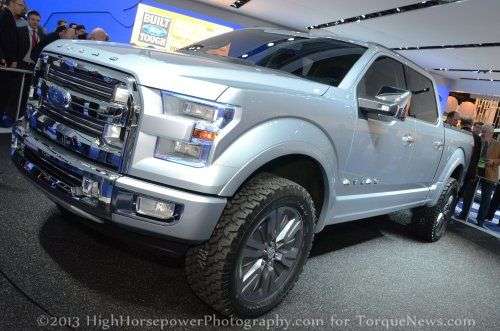 Ford Motor Company didn’t make a whole lot of noise about what they were bringing to the 2013 North American International Auto Show, when they took the stage in Joe Louis Arena this morning and brought out the new Ford Atlas Concept truck – the Motor Company alluded to a very, very bright future for the popular Ford F150.
Advertisement

The Ford Atlas Concept truck is a vehicle that Ford Motor Company refers to as their future vision for pickup trucks but in reality, the Atlas could very well be giving us an early look at the next generation of the nation’s bestselling F150 pickup. This includes a sharp new look and a variety of features that – with some revisions – could very well become features of a production F Series pickup in the very near future. While Ford didn’t specifically state that the Atlas hints to the next F150, the drivetrain options, the exterior design and the overall size of this concept truck leads me to believe that this could be a our first glimpse into the future of the Ford half ton pickup truck.

“The Ford Atlas Concept previews the innovations that will transform what people expect from their pickup,” said Raj Nair, Ford group vice president, Global Product Development. “With 36 years as America’s best-selling pickup, we are absolutely committed to setting the agenda in the truck market.”

Generally, I find a great many of the concept vehicles that debut at the Detroit Auto Show to be nothing more than outlandish styling studies that may show possible future features but these vehicles exhibit such extreme styling inside and out that it is clear that these vehicles will never see production. Because of that, I rarely get particularly excited about concept vehicles but that is not the case with the new Atlas.

The Ford Atlas Concept that has a spread of exterior styling cues that could very realistically show up on the next generation of the Ford F Series; particularly the F150. The Atlas has a front end design that is unmistakably similar to the current Super Duty lineup beginning with the massive stacked headlights. While these multi-unit lighting assemblies differ quite a bit from those found on the current Super Duty lineup (F250, F350, F450) thanks to the addition of both LED lights in the high beam and low beam along with bright blue LED trim around the outer edge. Connecting the headlights is a big, bold grille with tons of chrome and a basic design that is unlike anything used on current F Series pickups with one prominent bars running through the middle carrying the Ford Blue Oval. While the grille of the Atlas doesn’t sport the bold two bar design of the Super Duty, there is a clear relation between the current F350 and what might be the future F150. Above the headlights and grille of the Atlas sits a powerful hood with a raised cowl that also has a certain Super Duty feel to it. Low on the front end, Ford has equipped the Atlas with an off-road ready skid plate design accompanied by an automatic adjustable air dam that lowers at highway speeds to improve aerodynamics (which improves fuel economy) but the air dam shifts back up at lower speeds to provide more ground clearance.

“We wanted the concept to reflect how Ford trucks help customers in both their worlds – professionally and personally,” said J Mays, Ford group vice president and chief creative officer. “Every surface and feature in the vehicle has been crafted for purpose and capability while retaining an unmistakable Built Ford Tough look.”

Along the sides, the Ford Atlas Concept truck has a basic design that is very similar to the current Ford F150 with fairly flat lines along the hood, bed and through the body lines while sharply accentuated wheel flares break up the linear exterior design a bit. Under the sides of the Atlas, Ford has added automatic power running boards that swing down when the door opens to offer an easier step to front and rear riders. The Atlas rides on innovative wheels with active shutters that close while traveling at higher speeds while opening at lower speed to provide a better look and while these wheels are cool, they are one of the very few features on the Atlas that seem unlikely to travel through to production.

Out back, the Ford Atlas has sharp looking LED taillights that feature a similar wrap around trim design to the headlights that look like something that could very easily head into production exactly as they are. The Atlas tailgate has very basic lines with an integrated spoiler along the top in addition to a revised bed-step that can also serve as a cargo cradle. The new EcoBoost engine announces itself via a set of large rectangular tailpipes that run along the bottom of the bright chrome bumper.

Very little information is offered on the drivetrain of the Ford Atlas Concept truck but we do know that it will be powered by a next generation EcoBoost – presumably a V6 although a twin turbo V8 isn’t completely out of the question. With the help of features like the active grille shutters, the active front air dam and the overall improved aerodynamics, Ford expects that the next generation EcoBoost will help the Atlas achieve new levels of fuel efficiency. Helping to make the Atlas easier to use, Ford has added Dynamic Hitch Assist for easier trailer docking while a new Trailer Backup Assist system is said to make backing up with a trailer connected much simpler for the novice driver.

The interior is another area where I believe the production version of the Ford Atlas/next generation Ford F150 will vary from the concept with the seats being the main “issue”. The Atlas has a front seat design that is similar to that found in high end supercars with a thin, lightweight composite seat frame covered with leather and padding. This thin seat design allows for increased leg room for the rear passengers and while they are great in theory – this type of seat usually only appears on supercars with much bigger price tags due to the high cost of production.

Honestly, the only features of the Ford Atlas Concept truck that I wouldn’t foresee moving through to production would be the seats and the high tech wheels as both of those features would be very expensive for the Ford F150. However, this is an absolutely gorgeous pickup truck and should Ford be able to transform the Atlas into the next generation F150 – particularly in exterior styling – I believe that they would have a half ton pickup that would sell like hot cakes. It isnt often that I see a concept vehicle that wows me but the Super Duty like exterior styling of the Atlas would make for one incredible F150. While it is only a concept right now, this truck is a total home run.

You can have a closer look at the new Ford Atlas Concept pickup from the 2013 NAIAS by clicking any of the thumbnails above on the right.

Aaron Turpen wrote on January 16, 2013 - 11:03pm Permalink
That's a great-looking truck. Ford has stepped up to the plate. Now it's time for GM to do something.