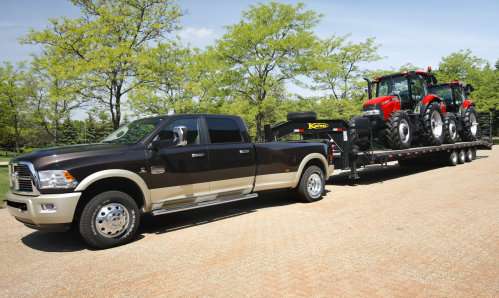 The 2013 Ram 1500 has been busy over the past few months scoring awards from all sorts of automotive authority but today, the Chrysler Group announced a new towing capacity for the 2013 Ram Heavy Duty that makes the Ram 2500 and Ram 3500 the most capable trucks on the market today – with a maximum towing capacity of 30,000 pounds.
Advertisement

The 2013 Ram Heavy Duty lineup for the non-commercial segment is comprised of the Ram 2500 and the Ram 3500 – both of which have been beefed up for the 2013 model year to make them the most capable vehicles in their respective segment. Both the 2500 and 3500 Ram pickups are powered by the 6.7L Cummins Turbo Diesel Engine that has been upgraded for the new model year with the result being an impressive torque output of 850lb-ft. This figure makes the 2013 Ram Heavy Duty the most powerful truck in the class compared to Ford’s Power Stroke with 800lb-ft and GM’s Duramax at 765lb-ft but more importantly – this ultra powerful Cummins engine makes the Ram 2500 and Ram 3500 the most powerful trucks in the segments.

"We built the new 2013 Ram Heavy Duty to be the undisputed Heavy Duty 'King of the Road.' These new rigs deliver on the number one key attribute most critical to these customers: uncompromising capability,” said Fred Diaz, President and CEO — Ram Truck Brand and Chrysler de Mexico, Chrysler Group LLC. “Towing capability, reliability and engine performance are ranked first through third, respectively, with HD customers. The 2013 Ram Heavy Duty trucks unequivocally deliver all those things, as well as a very low total cost of ownership.”

In addition to the 30,000 pound towing capacity that makes the 2013 Ram 3500 far and beyond the best in class, the new Ram HD also offers the best Gross Combined Weight Rating (GCWR) of 37,600 pounds. This number is the combined weight of the truck, the trailer, the contents of the trailer and the contents of the vehicle – both in the bed and in the cabin. The GCWR of the 2013 Ford F350 is 30,000 pounds while the 2013 Chevrolet Silverado 3500 offers a GCWR of 30,500 to the new Ram Heavy Duty is 7,100 pounds better than the closest competition.

Finally, helping the 2013 Ram 2500 and Ram 3500 to handle all of this weight, all of the new Ram Heavy Duty trucks are fitted with stronger front axle shafts, the Ram Active Air Intake system and a fully revised front and rear suspension setup featuring new leaf springs from Hotchkiss. Oh, and the super powerful 2013 Cummins Turbo Diesel has an oiling system that only requires an oil change every 15,000 miles.

The 2013 Ram Heavy Duty will make its grand debut next week at the 2013 North American International Auto Show in Detroit.