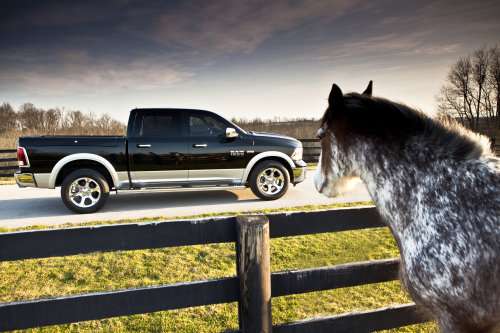 Chrysler announced today the official specifications for the new Pentastar V6 found in the 2013 Ram 1500 and even though the new 3.6L V6 makes the Ram 1500 the most powerful ‘entry level’ truck in America – it is also the most fuel efficient half ton truck on the market today.
Advertisement

The 2013 Ram 1500 powered by the 3.6L Pentastar V6 packs 305 horsepower and 265lb-ft of torque, making it the most powerful V6 half ton pickup on the market in addition to being one of the most powerful applications of Chrysler’s popular V6. More importantly, thanks to a new 8-speed automatic transmission, improved aerodynamics and other technologies including a standard Start/Stop system, the two wheel drive variant of the Ram 1500 with the Pentastar engine is capable of hitting 18 miles per gallon around town and 25mpg on the open road – marking an improvement of more than 20% over the outgoing 3.7L V6.

“The new 2013 Ram 1500 is the most capable, best-looking half-ton pickup in the world and delivers best-in-class fuel efficiency, new technology and new features while upgrading the interior and exterior,” said Fred Diaz, President and CEO of Ram Truck Brand. “We changed every area of the truck – from a newly designed frame with air suspension, to a new eight-speed transmission to a new interior with the next-generation Uconnect® system. With best-in-class towing and payload, best-in-class ride and handling and best-in-class aerodynamics, the 2013 Ram 1500 delivers unmatched content, performance and capability to our customers.”

So the 2013 Ram 1500 V6 is the most powerful, the most efficient and the most capable entry level half ton truck on the market with available technology like active shutters and an adjustable air suspension system but prepare to be amazed…as it is also among the least expensive. In fact, with a starting price of just $23,585 (including the $995 destination fee), the only truck on the market less than the 2013 V6 Ram 1500 is the Chevy Silverado WT model which is available only with the 195 horsepower, 4.3L V6 engine. The Silverado WT carries a starting price of $23,190 so in compromising all of that power, Silverado V6 owners only save $395. The new V6 Ram is quite a less expensive than the entry level Ford F150 and Toyota Tundra – with the Toyota starting at $26,150 and the Ford starting at $24,495 (both including a $995 destination fee).

In addition to the super efficient new Pentastar V6, the 2013 Ram 1500 has received a variety of upgrades including a 5-mode air suspension system and active grille shutters. You can read about both of those new bits of technology (including videos showing how they work) and the rest of the 2013 model year Ram upgrades by clicking here.