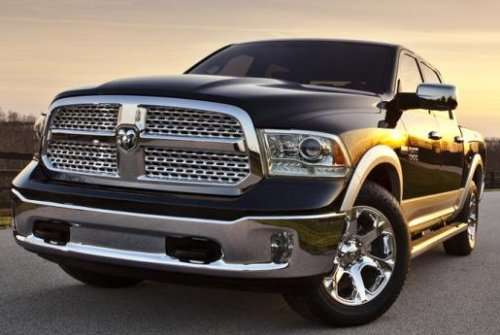 The Chrysler Group announced the details for their 2013 Ram 1500 today with a slight facelift, more power from the Hemi, the new Pentastar V6, an air suspension system, start/stop technology and an 8-speed automatic transmission for both engines that is expected to help increase fuel economy by roughly 20%.
Advertisement

To many drivers around the US, it will be tough to distinguish the 2013 Ram 1500 from the 2012 models but when it comes to consumers visiting dealerships – the 2013 Ram 1500 offers a great deal more. More power from both the 5.7L Hemi V8 and the new Pentastar V6, more miles per gallon from both engines thanks to new technology and an 8-speed automatic transmission, more luxury inside with improved fit and finish along with an enhanced UConnect system and more versatility with an air suspension setup with modes for all sorts of situations.

The biggest news with the 2013 Ram 1500 is the addition of the new 8-speed TorqueFlite automatic transmission, which is available with both the 3.6L Pentastar V6 and the mighty 5.7L Hemi. The new 8-speed automatic transmission in the 2013 Ram 1500 is controlled by a new knob setup rather than the traditional handle shifter on the console or on the steering column. Mounted next to the infotainment screen in the center stack, the new Ram has a large, silver knob with PRND above it and that is how you will select your gears in the 2013 Ram. For those trucks equipped with four wheel drive, the area below the shift knob features the push button controls for the 4WD system including 2WD, 4WD lock, low and auto buttons. It will be interesting to see how the new knob shifter works out; and how well consumers respond to this new design.

In any case, a 20% improvement in fuel economy would make the 2013 Ram 1500 the most efficient truck in the class with the V6 and the most efficient V8 truck in the class according to Chrysler’s early estimates on fuel economy. We will have to wait for official MPG figures but from the sounds of things – the Ram Truck brand is making wise choices with the rising price of gasoline. In addition to the 8-speed automatic transmission, the new Ram will be equipped with an auto start/stop system that will help prevent fuel waste during idle time in traffic and when cruising on the highway; the 2013 Ram will include an automatic shutter system behind the grille to improve aerodynamics.

Also aiding in the improved fuel economy, the 2013 Ram 1500 is quite a bit lighter than the outgoing models. The use of high strength steel has reduced the weight of the frame by up to 30 pounds depending on the configuration, while new lightweight materials and designs in the bed, hood and steering system cut weight by an additional 40+ pounds.

While the 2013 Ram 1500 engine lineup featuring the new Pentastar V6 and Hemi V8 will be more efficient, they will also be more powerful than the 2012 Ram 1500 engine options. The 2013 Ram 1500 base model engine will be the 3.6L Pentastar V6 that Chrysler has used in almost every vehicle in their lineup and for the new Ram, the Pentastar features it’s most powerful form yet. The new V6 Ram 1500 will pack 305 horsepower and 269lb-ft of torque, a healthy increase over the 210hp and 235lb-ft of torque in the current entry level Ram V6. The 5.7L Hemi V8 does not technically receive any changes to increase power output but thanks to a new electronic power steering system, the Hemi makes 5 more horsepower for a total of 395hp and 407lb-ft of torque. When properly equipped the 2013 Hemi-powered Ram 1500 will be able to tow a stunning 11,500 pounds while also hauling 3,125 – both best in class figures.

The final major addition to the 2013 Ram 1500 lineup is the new air suspension system that offers modes for a variety of situations. The modes of the Ram’s air suspension are NRH (normal ride height), Aero Mode, Off-Road 1, Off-Road 2 and Park mode. When set to NRH, the 2013 Ram 1500 has a ground clearance of 8.7 inches but when Aero Mode is selected, the truck lowers itself 1.1 inches to help it cut through the air more easily. Off-Road 1 raises the truck 1.2 inches compared to NRH while Off-Road 2 raises the truck a full 2 inches for almost 11 inches of ground clearance in stock, factory issued form. Finally, Park Mode lowers the vehicle by 2 inches so that it is easier to load cargo in and out of the bed or cab, while also making it easier for passengers to access the vehicle.
The adjustable air suspension package is controlled by either the buttons on the center console or via the key fob. This system is also equipped with a self-leveling system so when you load heavy cargo into the bed, the truck’s suspension system can meter the posture of the truck and make adjustments to get it back to the chosen ride height all around.

The Chrysler Group has issued the videos below to show off the function of the new shutter system, air suspension and start/stop technology. While the aesthetic changes may only jump out to someone who is either very well versed in Ram pickups or someone who is comparing the 2012 and 2013 1500 side by side, the changes that we cannot see are far more substantial. With more power, better fuel economy, a high tech active suspension system and a more luxurious cabin – the 2013 Ram 1500 looks to set the standard for excellence - and technology - in the half ton truck class.

Robert wrote on May 1, 2020 - 10:59pm Permalink
I was wondering are all 2013 and newer Ram 1500 trucks equipped with the adjustable Air suspension auto leveling system. I am looking to buy one with a 5.7 Hemi and 8speed with the air suspension. I want to tow a 20 foot enclosed trailer like 10 times for about 8000 miles total with only about 7000 to 8500 weight total including the trailer. The rest of its life will be just generally family driving and sometimes so fun driving. My wife and kids want the sport version with the sunroof and leather seats and I kind of hope for the Ramboxes in the bed and a crew cab. I guess I am hoping that all the 2013 have the air suspension so if there is a way to determine which ones do and don't have it would be nice to find out. Thank you Robert