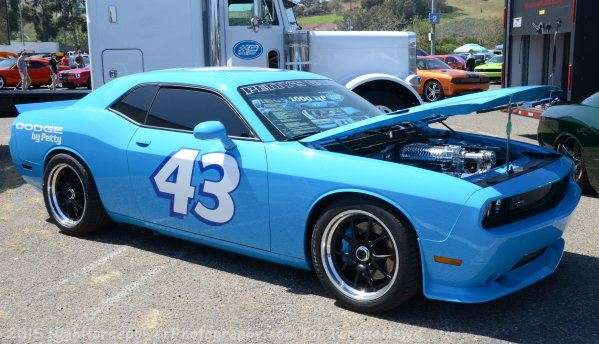 This past weekend I attended the 215 LX Spring Festival in Irvine, California and while it would be impossible to show you every car in attendance, over the next few days I will bring you my favorite cars from the show, beginning today with my top ten favorite Dodge Challenger models in attendance at the gigantic modern Mopar show.
Advertisement

The 2015 LX Spring Festival is the 10th annual installation of an event that started off as a simple local club show in Southern California, but over the course of a decade, it has grown to be one of the largest all-Mopar car shows in the United States while being the largest late model Chrysler Group car show in the country. If you love the new Dodge Charger, Dodge Challenger, Dodge Magnum, Chrysler 300 or Jeep Grand Cherokee, LX Spring Festival is the show for you.

The 2015 show marked the move to the larger venue of the Irvine Verizon Amphitheater, allowing the show to grow beyond the 800+ cars in attendance last year. This new location allowed the 2015 LX Spring Fest to be much bigger than ever, with over 1,000 registered vehicles from all over the country and in addition to being an incredible show – it is all for charity. The 2015 show was the biggest and the most charitable, with more than $12,000 being contributed to local area children’s charities.

While I don’t have official numbers by model, the Dodge Challenger appeared to be the most popular vehicle among the show cars on display and while it is nearly impossible for me to bring you a look at every Challenger in attendance, I have put together a list of my top ten favorite 2-door Mopar muscle cars on display in Irvine this weekend.

There are in no particular order, but of the hundreds of 2008 and newer Dodge Challengers in attendance, there are the ten that I loved the most. This blacked out Dodge Challenger R/T wasn’t heavily modified, but the unique gold wheels tucked up high in the wheel well and the low hanging front chin spoiler gave this car a muscular, minimalist look that I loved. There were a handful of 2015 Dodge Challenger SRT Hellcat models on display, but this 707hp muscle car with the Hellcat logo sprawled down the side with the SRT logo and satin black wrapped hood was my favorite of the stock-looking Hellcat models. Im not sure what trimline this Dodge Challenger is, but with a front to rear satin black finish, a low hanging chin spoiler, a Shaker hood design and multi-spoke wheels set high in the wheel wells with an aggressive suspension setup, this car looked ready to go road racing. This bright red Challenger packed a custom Kenne Bell blown Hemi, a unique hood, a huge rear spoiler, unique wheels and a parachute system leading me to believe that it is a high speed monster – and with the uniqueness of the purpose-built exterior look, I fell in love with this blown beast. I’m a sucker for green cars and while I would pick Sublime for a Challenger of my own, the dark metallic hue of this Challenger was stunning in the bright SoCal sun. Add to the gorgeous paint an elaborate green halos in the headlights and foglights, a low profile hood scoop and a low, aggressive stance and this car was draw plenty of attention all day long. This Dodge Challenger has been customized by the Petty Garage with unique suspension, engine and braking components making this 1,000hp Mopar muscle car one bad beast in Petty’s familiar bright blue #43 scheme. This is probably the most minimally modified looking vehicle on this list, but with the simple stripe package, the extreme lowering setup and the brushed silver wheels wrapped in low profile tires, this Dodge Challenger is clean and mean. There are lots and lots of red and black Dodge Challenger SRT models in attendance, but this one had the most unique custom paint scheme, with the stock black hood stripes accompanied by a black painted upper portion of the body, black wheels and red halo headlights. Dodge hasn’t made a new Challenger T/A, but this custom built Trans Am package looked clean enough to be a factory package with the T/A snorkel style hood, the black stripes running along the fenders and custom black wheels. Add to this custom package the fact that I love B5 blue, and this car was an easy pick that caught my eye as soon as I got to the show. Furious Fuchsia was only offered for the Dodge Challenger for a short time, but the owner of this custom Challenger added touches of lighter pink along the sides and on the Shaker hood scoop for a sharp, eye catching design. The owner also added a 1971 Cuda-like grille so while the modifications aren’t extensive and the pink hues aren’t for everyone, I really liked the look of this unique Mopar muscle car.

Over the next few days, we will be bringing you more top ten lists from the 2015 LX Spring Festival, including a look at my favorite Chargers, 300s, Magnums and Jeeps from the massive SoCal event.