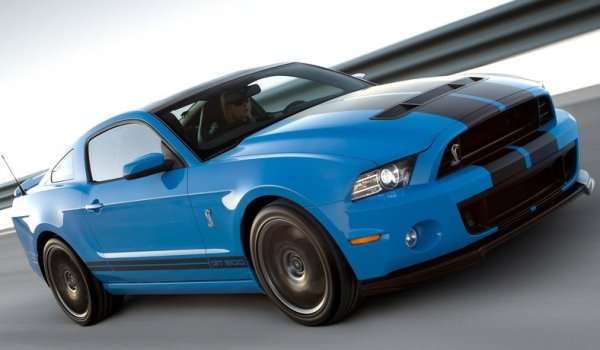 While the Mustang community has turned all of its attention to the new Shelby GT350 and GT350R models, we should all keep in mind that there is plenty of room left in the company lineup for a new GT500 Mustang that would compete with the Hellcat Challenger.
Advertisement

While the Mustang community has turned all of its attention to the new Shelby GT350 and GT350R models, we should all keep in mind that there is plenty of room left in the company lineup for a new GT500 Mustang that would compete with the Hellcat Challenger.

Before we met the new Ford Shelby GT350 Mustang at the LA Auto Show last year, there had been a long, ongoing debate as to what to expect with the next high performance Mustang. We all knew that there would be a model above the Mustang GT and early on, there was some discussion whether Ford would continue to use the Shelby name, or if they would move to the SVT Cobra moniker. There was also some discussion whether this new car would be an evolutionary version of the 2014 Shelby GT500 Mustang with a big, powerful engine or if Ford would go a totally different route – focusing more on road racing performance over all out muscle.

Over time, we learned that Ford would continue on with the Shelby name and through leaked dealership documents, we know ahead of the LA Auto Show that the newest high performance Mustang would be called the GT350. The GT350 made its grand debut and we learned that Ford went the road racer route, including a new flat plane 5.2L V8 and a host of other unique features that will help make the new Shelby Mustang the best-handling Ford pony car of all time. The GT350 was quickly followed up by the debut of the more track-capable GT350R at the Detroit Auto Show and at that point, the discussion about the future of the Mustang lineup seemed to stop.

For some, we now have the entry level 2015 Mustang V6, followed by the new EcoBoost Mustang that blends fuel economy with performance while the Mustang GT is the muscle car for the daily driver who wants to go fast on the way. Finally, we have the Shelby GT350 and GT350R for the serious drivers who want a Mustang that will handle the turns as well as any muscle car on the road. This is an attractive lineup, but it fails to offer up a proper competitor for the likes of the 580 horsepower Chevrolet Camaro ZL1 or the 707 horsepower Dodge Challenger SRT Hellcat.

In other words, there is still a hole in the Mustang lineup relative to the competition, and I expect that Ford could fill that hole with a new Shelby GT500 – or a new SVT Cobra.

The Possibilities of a New GT500
The new Ford Shelby GT350 Mustang is promised to offer at least 500 horsepower and at least 400lb-ft of torque, and while official numbers have not been offered, it seems as though the GT350 will fall well short of the previous Shelby GT500 Mustang and both of the most powerful packages from Chevy and Dodge. The GT350 and GT350R might out-handle anything with a Camaro or Challenger badge, but those capabilities are lost on public roads, where the guy with the most power generally wins the race.

In other words, while Ford might be winning the road race with the GT350R, they are losing the horsepower war. I have a hard time believing that Ford – the same company who offered up the 662 horsepower Shelby GT500 Mustang just one model year back – will just sit by and let Dodge brag about having the most powerful muscle car of all time.

Something that we should all keep in mind is that Ford Motor Company loves calling on the history of the Mustang. The original Shelby G.T. 350 was introduced in 1965 and while it packed more power than the standard Mustang, it focused more on weight reduction and handling performance. That was true for 1965 and 1966, but in 1967, the Shelby G.T. 500 was introduced with a 428 cubic inch big block V8. Were Ford to follow the path of the original Shelby Mustang, they could have the new GT350 in 2015 and 2016, followed by a new GT500 in 2017.

The 2017 Shelby GT500 Mustang
While this talk of a new GT500 is purely speculation, there is clearly space in both the Mustang lineup and in the muscle car segment. The 2015 Challenger Hellcat is the current king of the hill with 707 horsepower, but with the next generation Camaro right around the corner, an LT4-powered Chevy muscle car could challenge the big Mopar. A new Shelby GT500 would follow in the footsteps of the previous version, packing a big V8 engine topped by a supercharger to produce enough power to battle the cross-town rivals. While we are dreaming, there is also the possibility of a twin turbo GT500, using EcoBoost technology to create a 700+ horsepower Mustang.

Let’s all keep our fingers crossed and hope that Ford sees the need to fill the high performance muscle car hole very soon.