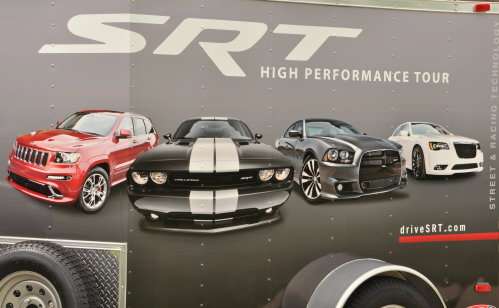 The SRT High Performance Tour kicks off at the Mopar Nationals

This past weekend as the 2011 Mopar Nationals opened at National Trails Raceway near Columbus Ohio, the diehard enthusiasts who came together for the nation’s biggest all-Chrysler show, swap and drag race event got a firsthand look at the new 2012 Dodge, Jeep and Chrysler models as the first stop on the SRT High Performance Tour.
Advertisement

This cross-country tour which officially began at the Mopar Nationals will hit a wide variant of events around the country, with a total of 40 stops between their original starting point at the Chrysler headquarters in Auburn Hills, Michigan and the final stop at the 2011 SEMA Show in Las Vegas. Along the way, a team of four SRT brand engineers familiar with the 2012 Dodge Charger SRT8, the 2012 Dodge Challenger SRT8 392, the 2012 Chrysler 300C SRT8 and the 2012 Jeep Grand Cherokee SRT8 will pilot those four incredible high performance models to these various enthusiast meetings before ending at SEMA. In all, the four vehicles touring the country to show off the 2012 lineup of the newly formed SRT brand will be packing 1875 horsepower and 1875lb-ft of torque – as well as plenty of SRT branded handouts for the fans and in-depth information on these new models.

I was on hand at the 2011 Mopar Nationals this weekend and throughout the course of their time spent at National Trails Raceway, Mopar enthusiasts flocked to the display which offered not just information and swag but also a chance to sit in and touch these new models. Needless to say, this was a very popular attraction and the area was frequently packed full of Mopar lovers who wanted their chance to sit in and experience the new 2012 SRT brand lineup.

SRT CEO and President Ralph Gilles had this to say about the SRT High Performance Tour:
“We’re excited to take our 2012 Chrysler, Dodge and Jeep SRT vehicles directly to our performance fans and loyalists across the country,” said Ralph Gilles, President and CEO – SRT Brand, Chrysler Group LLC. “Each of these vehicles is loaded with new technologies and content that SRT customers want to fulfill their need for power, performance, contemporary luxury and safety while maintaining each of the vehicle brand’s key design differentiators.”

Gilles also spoke to the media prior to the kick-off for the event, explaining that much like the innovative creation of this multi-brand, high performance SRT group, the newest brand of the Chrysler Group will take unconventional methods to advertise their vehicles. Rather than “tier one” advertising such as television spots, SRT will use more of a grass roots efforts, hitting enthusiast events around the country to bring the vehicles in person to the people who are the most likely to be interested in them.

Click here for a closer look at the stops planned for the SRT High Performance Tour with Google Maps technology along with some information on the four lucky individuals who will spend the next 3 months racing around the country in some of the most powerful vehicles available in the US auto industry.

Check out the gallery below for a look at the vehicles included in the SRT High Performance Tour!