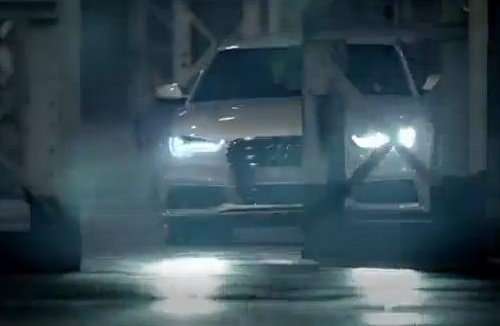 Audi settles dispute with rapper Eminem over A6 commercial

The Chrysler Group made big news when they introduced their new “Imported from Detroit” ad campaign with a new television spot during the Super Bowl featuring rapper Eminem and his popular song Lose yourself but when Audi released a very similar commercial a short time later – Eminem and his people weren’t too happy since they didn’t have permission to use the familiar guitar riff.
Advertisement

While the Audi commercial for the new 2012 A6 Avant (wagon) bore a striking resemblance to the Chrysler Imported from Detroit commercial (except for the fact that Audi used some unrecognizable actor where Chrysler used hip hop superstar Eminem), the problem wasn’t between Chrysler and Audi but rather, the dispute was between Eminem and the German automaker because the music used by Audi was strikingly similar to Eminem’s hit song Lose Yourself. Audi didn’t have permission to use the guitar line to the song so Eminem and his company Eight Mile Style LLC took their dispute to the folks at Audi.

Today, Audi announced that they had come to terms with Eight Mile Style LLC and while no terms have been announced, Audi and Eight Mile Style reportedly came to an agreement in a friendly manner. Chrysler’s Imported from Detroit campaign helped to raise money for local charities like the Marshall Mather’s Foundation and Audi plans to make similar contributions to charity.

Audi said in today’s statement that they intended to "support the revitalization of Detroit by contributing to selected social projects." The company also included the following verbiage in the announcement of agreement between themselves and Eminem’s people:

"Audi has tremendous respect for Eminem and his works, and likewise for the 'Imported From Detroit' campaign which was created by Chrysler, and certainly Audi would never wish to insult or harm those parties or their fans and customers.”

A representative of Eminem’s Eight Mile Style LLC told the Detroit Free Press that there should soon be announcement as to how Audi Auto Group plans to make a contribution to the Detroit area. Considering that the dispute was between Eminem and Audi, it will be interesting to see if Audi also contributes money to the Marshall Mather’s Foundation or if they donate to other groups around the Detroit area.

TorqueNews.com will continue following this story, bringing you any updates as they become available.

Below, you will find both the Audi A6 commercial along with Eminem’s Imported From Detroit Chrysler 200 advertisement.

Image captured from the Audi A6 commercial in question.

carlosshane1477 wrote on September 10, 2011 - 3:36am Permalink
Be aware of the latest <a href="http://www.automd.com/answers/search/dodge_m24/">Audi recalls</a> to be always be safe on the road. some of the recalls made are in fuel system and air bags..